Gaza riot operative warns Trump will be assassinated by a Palestinian 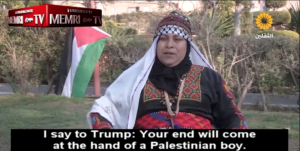 Gaza Return March Activist Maryam Abu Moussa said on an April 24, 2019 interview on Thaqalayn TV, that the Palestinians will soon bury the Jews in the” ditches of Hitler”. Her nonsensical diatribe on air included claims that Hitler ordered the Russians to dig ditches to bury the Jews during World War II, but refused to do so because they were “humane”. Then she claimed that when Hitler ordered the Jews to bury the Russians in ditches, “they did so immediately.”

Abu Moussa continued to say that if the Jews get their hands on the Golan Heights “the entire Arab world will be grabbed by Israel overnight.”

Abu Moussa goes on to accuse the Arabs of making fools of the Palestinians. She pledged that the Palestinian people will restore the honor of the Islamic nation and liberate Palestine and the rest of the Arab world.

Abu Moussa concluded her interview with a threat against U.S. President Donald Trump: “Your end will come at the hand of a Palestinian boy.”

She added: “Allah willing, we will soon pelt you with shoes.”

It should be noted that Robert Francis “Bobby” Kennedy, who served as the 64th United States Attorney General, was assassinated by a Palestinian, Sirhan Sirhan, on June 6, 1968, when he was the leading candidate for the Democratic nomination for the presidency of the United States.