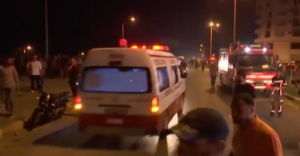 The Gaza Strip’s ruling Islamist group Hamas has declared a state of emergency and mobilized forces on a manhunt to apprehend suspects behind the midnight attack at separate police checkpoints inside the enclave.

Scene of Suicide bombing at checkpost in Gaza that killed a Hamas policeman. – Screenshot: i24NEWS

Sources in Gaza said one of the culprits who blew himself up in the attack– identified only as “AH”– was the son of a senior Palestinian Islamic Jihad member.

The assailant’s brother was a member of the Islamic Jihad’s military wing who was killed by Israel in 2012 for firing rockets from the Gaza Strip.

The sources say the assailant was also active in the ranks of the militant group.

On a curious note:
Yes, the Islamic Jihad movement is more militant, and more dangerous to Israel.

On a more optimistic note:
In the meantime, Hamas terrorists are being killed by Islamic Jihad suicide bombers in Gaza.

As a Jew, I do not celebrate in the death of human beings.

But, I do thank G-d for making Jews a tad safer  with his reduction of terrorists in Gaza. – May G-d in his wisdom, continue to protect Israel.