Mortar lands in Eshkol area with no injuries or damage.

A mortar shell fired into southern Israel from the Gaza Strip landed in the Eshkol Regional Council area on Tuesday morning.

No injuries or damage were reported in the attack.

IDF soldiers were operating in the area where the mortar shell landed near the Gaza border fence.

Meanwhile on Tuesday, a Palestinian terrorist was killed and four others were injured in an accidental explosion in Gaza City, the Palestinian Ma’an news agency reported.

Ma’an quoted security sources in Gaza as saying the explosion was accidental and not the result of an Israeli strike. 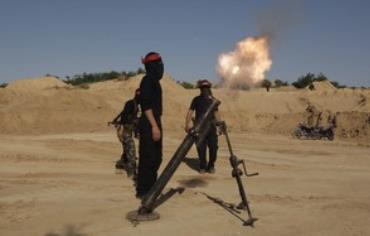 Tuesday’s events came after the air force bombed two underground rocket launchers in northern Gaza last Thursday, in response to a mortar attack on southern Israel earlier in the day.

Palestinians did not report any injuries or damage in the strikes.

The Palestinian attack and IAF reply occurred a year to the day that Israel launched the week-long Operation Pillar of Defense, which began with the targeted assassination of Hamas military wing head Ahmed Jabari, and which was aimed at reducing Hamas rocket fire on southern Israeli communities.