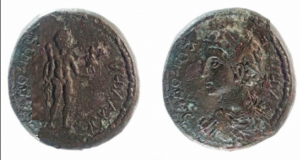 German tourist writes to Israel Museum of the Bronze coin bearing an image of Roman Emperor Commodus and the word “Ashkelon” in Greek script: ‘I had to return the unique coin to its owner, the State of Israel.’

A German doctor has decided to return a rare ancient coin he discovered on a visit to Jerusalem 25 years ago.

The bronze coin might have been minted for a special occasion, says Dr. Haim Gitler of the Israel Museum – Photo: Peter Lenny/Israel Museum

The bronze coin picked up by Dr. Tonio Sebastian Richter dates from 178-179 C.E. and is imprinted with a profile of the Roman Emperor Commodus. The name “Ashkelon” appears on the coin in Greek script.

Richter took the coin back to Berlin, cleaned it and realized it was an ancient artifact. He tried to find information about the coin, and kept it in his possession until he heard that the Israel Museum was celebrating 50 years since its founding and decided to return the coin.

Richter sent it to the museum along with a letter in which he wrote: “I found this coin in the summer of 1991 when I was on an educational tour of Jerusalem. The object I found on the ground couldn’t be identified as a coin, but only as a round metal object I picked up. In Germany, I cleaned it … and discovered that it was an ancient Roman coin from Ashkelon.”

Richter explained that he began researching the coin, and after consulting experts he realized that the coin was of an unknown variety. In his letter, Richter said, “After I grew up, I realized I had to return the unique coin to its owner, the State of Israel, and to the best place for it to be kept, the Israel Museum.”

Dr. Haim Gitler, chief curator of the Israel Museum’s Archaeology Wing, who received the coin, said, “This important coin is larger than the standard coins that were used on a daily basis. It might be that it was minted for a special occasion. It measures 34 millimeters [1.3 inches] across and weighs 33.4 grams [1.18 ounces]. It’s exciting, because this is the only coin of its type. I believe it will be displayed in the future.”