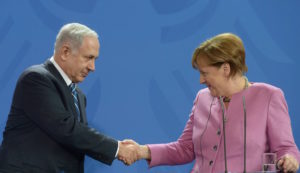 Germany is set in July to take the presidency of two key institutions, the Council of the European Union for six months, as well as the UN Security Council for a month, meaning, Berlin will head two major international forums just as they will need to respond to Israeli actions, should Jerusalem move forward with its intention to apply sovereignty onto the contested territory.

German Foreign Minister Heiko Maas is expected to arrive in Israel Wednesday, likely to warn the government of the move’s consequences.

Maas will meet with Netanyahu, Defense Minister Benny Gantz, and Foreign Minister Gabi Ashkenazi as well as with Palestinian and Jordanian officials.

Diplomatic sources said that Maas, speaking in the name of a number of European foreign ministers, will try to convince Israel to avoid taking any unilateral actions, chiefly annexation.

The European Union has already conducted several hearings on possible sanctions to try and deter the Jewish State from the notion. Some of the sanctions, mainly financial ones, do not require a majority among the 27-member body.

If Israel does go through with annexing parts of the West Bank, at least eight European nations are mulling officially recognizing a Palestinian state.

Some of the nations believed to go through with such an initiative include France, Luxembourg, Belgium, Ireland, and Spain.