Uproar in local media, as well as in the museum, forces removal of Golda’s inclusion dedicated to world’s leading women.

Egyptians were outraged Sunday, causing an uproar in the local media after discovering that a museum near Cairo had been displaying a picture of none other than the fourth prime minister of Israel, Golda Meir. 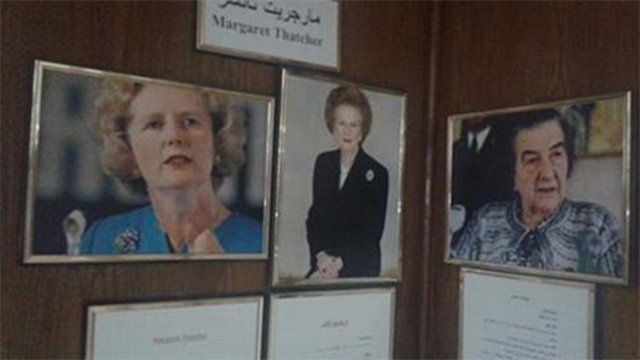 The new “Pioneering Women” museum in the Pharaonic Village of Giza opened Saturday, with the purpose of relating the stories of women who had changed society. Meir’s picture was hanging there besides those of former British prime minister Margaret Thatcher and the wives of former presidents of Egypt, Suzanne Mubarak and Jehan Sadat.

The head of the museum, Dr. Abdel-Salam Ragab, was quick to explain and apologize: “It was a mistake and it was corrected. No one should doubt our patriotism,” he said. Speaking to Egyptian newspaper Al-Ahram, he explained that the museum includes exhibits and photographs of 70 women from around the world who have a marked impact on humanity, both positively and negatively, from the Pharaonic era to the present day.

“All the women were carefully chosen, and one of them was indeed Golda Meir, but the picture was removed from the museum right after it opened on Saturday, after several visitors protested the presence of her picture here,” he explained.

Ragab stressed that, in any case, the objective of the museum is to draw Egyptians’ attention to women and not to call for normalization of relations with Israel, a policy that a huge amount of people in the Land of the Nile oppose, even 36 years after the signing of the peace agreement.

Among the protesters was the Egyptian writer Youssef al-Qaid, who went one step further and demanded, during a television interview Sunday night, that the union of lawyers take legal action against those responsible for the exhibition for displaying a picture of a prime minister of Israel.

He described her as someone who was “the most dangerous woman in the history of Israel – bar none”, and explained that it was because she was “an anti-Arab extremist.” He called the exhibition of her picture in the museum “a crime against the homeland.”