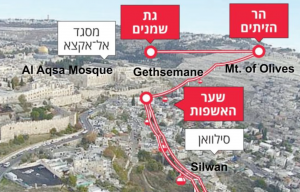 On Sunday, as Israelis marked the 51st Jerusalem Day, the Israeli cabinet approved the proposal of Tourism Minister Yariv Levin (Likud), to invest NIS 200 million ($56 million) – to be distributed equally between the Tourism Ministry and the Finance Ministry – in the construction of the tourist cable car project to Jerusalem’s Old City. The project will be implemented by the Jerusalem Development Authority.

“The cable car project is a significant milestone in advancing Jerusalem and strengthening its status as a world tourism capital in order to significantly increase incoming tourism to the country and strengthen its economy,” the government decision read.

“The cable car will be a unique tourist attraction, from which tourists and visitors can look down on the city of Jerusalem and its unique sites. The cable car project will also strengthen and further expand the tourist night life in the city and help overcome the accessibility issues for tourists seeking to visit the Old City. Cable cars of this nature already operate successfully in other cities around the world, attracting significant numbers of tourists.”

The planned cable car route is 1,400 meters long (0.87 miles), and will run between the tourist-friendly First Station compound in the German Colony, through the Mount of Olives to the Dung Gate at the Old City walls. The cable car has four stations, including Mount Zion and the Kedem Visitor Center in the City of David. Most of the planned route will pass through publicly-owned land.