“There were no ovens, this is a lie … there were no gas chambers either,” says leader of Golden Dawn party, prompting outcry from Greek Jews.

ATHENS – Greece’s government and Jewish community on Monday condemned the leader of a far-right party for saying there were no gas chambers in Nazi concentration camps.

Nikolaos Mihaloliakos, whose Golden Dawn party became potential kingmakers after an inconclusive election on May 6, also challenged the view that six million Jews were killed in World War Two. 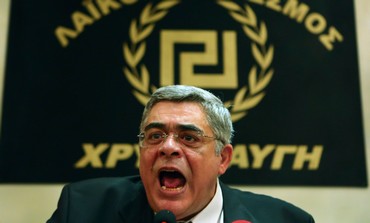 “There were no ovens, this is a lie … there were no gas chambers either,” Mihaloliakos said on Sunday in an interview on the private Mega television station.

Golden Dawn, whose members give Nazi-style salutes, took nearly 7 percent of the vote in a surge for fringe parties opposed to austerity policies under Greece’s international bailout deal.

Mihaloliakos said the number of six million Jewish victims was an “exaggeration” and that “many people from different nations” died in German concentration camps, just like many Japanese died in U.S. camps.

“I most categorically condemn such views, which distort history and offend the memory of millions of Holocaust victims,” said government spokesman Pantelis Kapsis.

About 70,000 Greek Jews perished in Nazi concentration camps in World War Two, most from the northern city of Thessaloniki.

“The election of Nazi nostalgics is a heavy blow for Greek democracy. It is an insult to the history of Greece,” said a statement from the council of Jews in Greece, who today number about 5,500.

Denying the Holocaust is not a punishable crime in Greece, as it is in other European countries such as Germany and France.