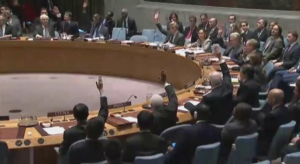 Jason Greenblatt, President Trump’s Mideast envoy, tells U.N. Security Council: PA’s political decision to blame Israel by rejecting $150 million in tax revenues, only hurts Palestinians in useless gesture.
• Kuwait tells UNSC: Many here believe Palestinians “have the right … to do whatever they want with their money.”

An “overwhelming” number of U.N. Security Council members oppose Israel’s decision to deduct money that Palestinians transfer to the families of terrorists who carried out attacks on Israel from their monthly tax revenue, Kuwait’s U.N. ambassador said Friday.

Mansour Al-Otaibi told reporters after a closed-door council meeting that Israel’s action was “in violation of existing bilateral agreements.”

He told the council that the Palestinian Authority’s decision to reject the latest tax transfer was only hurting the Palestinian people because they were rejecting the 95% of the tax revenue that Israel is not withholding, according to a diplomat at the meeting.

Greenblatt said it was “inappropriate” to focus on Israel, which was withholding 5-7% of the monthly tax revenue because of Ramallah’s “abhorrent practice” of paying that money “to terrorists and their families,” the diplomat said.

Kuwait’s Mansour, who called for the Security Council consultations along with Indonesia’s U.N. Ambassador Dian Djani, said the Palestinians “have the right … to do whatever they want with their money.”

He said U.N. Middle East envoy Nikolay Mladenov, who briefed the council by video, said “there is a need for mediation on this to solve it.”

Mansour said an “overwhelming” number of members of the 15-nation Security Council “think that this is a unilateral decision, it’s not acceptable, it’s a violation of the Oslo agreement and Paris protocol, and this is Palestinian money.”

Indonesia’s Djani said Israel’s suspension of international observers in Hebron coupled with the withholding of tax revenue were making things “more and more difficult once again for the Palestinian people, so that’s why we are raising this issue, because we don’t want to continue to escalate an issue.”

Djani said Greenblatt told the council that members who disagreed with Israel’s decision to withhold the customs revenues were free to discuss it with the Israeli government.

But in the meantime, the diplomat said, Greenblatt asked the Security Council to send a united message to the PA to stop “its irresponsible decision to reject the transfer of the remaining funds.”