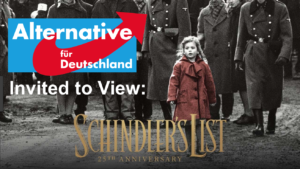 A cinema in the West German town of Hachenburg will mark the International Holocaust Remembrance Day on January 27 with a screening of Steven Spielberg’s world-acclaimed film Schindler’s List. Viewers will be asked to pay €7 admission, but for those who show their Alternative for Germany (AfD) party membership card, entrance will be free.

The unusual offer by the Hachenburg Cinexx immediately evoked controversy and protests from AfD members. “We find the fact that the AfD is being linked to the Holocaust, the industrial mass extermination of people of the Jewish faith, to be an unspeakable error,” party representatives in the state of Rhineland-Palatinate told German public broadcaster SWR.

A threatening YouTube video, mentioning the use of explosive devices, was also posted online and spread in the right-wing scene, triggering a police investigation.

“I know it’s a provocation,” the cinema’s director Karin Leicher told SWR. She reported receiving “an extremely large number of positive and also some critical feedback.”

In a statement published on its website, the cinema’s management explained that they view themselves as a meeting place and films as reflection of social discussions, and therefore seek to offer a place for debate.

An open discussion would be possible after the screening, assured the management.

“Our suggestion is definitely not to exclude or to defame the AfD. That so many feel strongly attacked [by it] is not our intention and incomprehensible to us,” it also stated. “We absolutely do not claim that AFD voters are Nazis – whether they are in need of historical enlightenment is at their own discretion. In our estimation, however, the AfD Party platform strongly suggests a trivialization of the events of that time.”

Local politicians came to the defense of the cinema’s initiative.

“If a party’s members partially questions the remembrance culture and shoe their contempt of it, then such actions are justified and I think they are good and creative,” noted President of the State Parliament Hendrik Hering.

Also Hachenburg’s mayor Stefan Leukel acknowledged the “educational value” of the screening to AfD members but lamented that the initiative draws unnecessary attention to the party.

It tell the real-life story of German industrialist Oskar Schindler named Righteous Among the Nations for saving 1,100 Jews during the Holocaust by employing them in his factories.

On January 27th, it will be screened in cinemas across Germany.