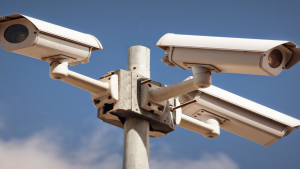 Badaran said the cameras Israel has put on Israeli roads, as well as the security cameras which have been installed in businesses and homes are used by Israel to gather information on terrorist cells and to prevent terror attacks.

Continuing this situation would cause the exposure of more “militants” and make it more difficult to carry out armed “fights” against Israel, he said.

Recently, security cameras led to the arrest of a terrorist cell in Ni’lin that was caught, preventing a terror attack.