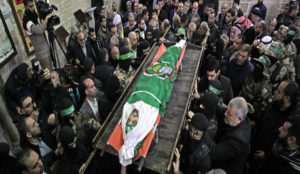 The Hamas-run Palestinian Health Ministry in Gaza reported that one Hamas officer was killed and three individuals were wounded in the strike. According to Palestinian sources, the officer killed was Abd al-Karim Reduan.

Later on Thursday, the IDF attacked an observation post belonging to the Hamas terrorist organization in the southern Gaza Strip, after rocket sirens sounded in numerous communities in southern Israel and security forces identified at least one rocket launch from the Strip into Israel.

The IDF statement affirmed that the IDF will continue to act intensively against terror activity led by Hamas.

Also on Thursday, Palestinians in the southern Gaza Strip fired two mortar shells at IDF soldiers who were engaged in operational activity near the security fence.

KKL-JNF firefighters positioned near the Gaza Strip reported that fires have broken out in 11 locations in southern Israel on Thursday. Two of them are in the region of Be’eri, and nine others are near Kibbutz Kissufim. All are a result of terror kites and balloons launched from Gaza into southern Israel.

Consequently, Defense Minister Avigdor Liberman held a meeting Thursday evening to assess the situation in the south, attended by the IDF chief of staff, the head of military intelligence, the commanders of the Southern Command and Central Command, the Coordinator of Government Activities in the Territories (COGAT) and members of the Shin Bet.

Israel has seen a sharp increase in violence and terrorism in the Gaza Strip in recent weeks, culminating last weekend when over 200 rockets and mortars were launched into Israel, and the IDF dropped over 50 tons of explosives on targets within the coastal enclave.

On Monday evening, Israel limited the movement of goods into the Gaza Strip through the Kerem Shalom Crossing, stopping the transfer of fuel and gas supplies but allowing essential medicines and food to pass. The fishing zone in the Gaza Strip was also reduced from a range of six to three nautical miles.

Kids should play with balloons, not have their lives threatened by them pic.twitter.com/xtZGH5KtIe

Israel has threatened further action if the incendiary kites and balloons do not stop.

Both Hamas and Islamic Jihad responded by saying that there would be “severe consequences” for tightening the siege on Gaza and that additional pressure on the coastal enclave would lead the region to “an explosion.”