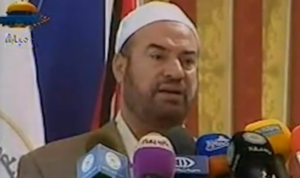 Speaking a funeral at the Great Omari Mosque in Gaza City, Fathi Hamad hailed the “success” of what he called “peaceful” protests at the Gaza security fence that have been going on since the end of March.

At the Gaza border protest, Palestinian mother teaches her kids to ‘burn the Jews’ – Screenshot.

Contrary to Hamad’s remarks, those protests have been marked by routine violence, including the flying of thousands of “fire kites” into southern Israel, resulting in the destruction of vast swaths of agricultural fields and nature reserves.

Unable to any longer resist the urge to incite at least a little violence, and exposing the true nature of the Gaza riots, Hamad blurted out: