Haniyeh was not at the headquarters during the IAF strike, Israel Radio reported. It was not immediately clear whether there were any casualties in the strike.

Heavy rocket fire renewed Saturday morning after a relatively quiet night, with 40 rockets fired at southern Israeli cities since midnight. In total, Palestinians fired 650 rockets toward the Jewish state since the beginning of Operation Pillar of Defense on Wednesday, but only 26 landed in built-up areas.
Palestinian sources report 39 Palestinian deaths, according to Israel Radio.

The Hamas cabinet headquarters were targeted with four airstrikes and were completely destroyed, a Hamas official told AFP. 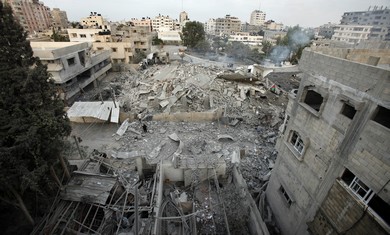 The Israel Air Force struck 200 targets in the Gaza Strip overnight Friday, including 120 rocket launchers and 20 tunnels, bringing the total number of targets throughout Operation Pillar of Defense to 830.

Among the targets were Hamas Interior Ministry and Hamas police compound, as well as Hamas training facility and rocket launching squads.

Obama “reiterated US support for Israel’s right to defend itself, and expressed regret over the loss of Israeli and Palestinian civilian lives,” according to a statement on the call.

Earlier Friday evening Defense Minister Ehud Barak received Cabinet approval for the IDF’s request to increase the maximum number of reservists it could enlist to 75,000 ahead of a possible Gaza ground operation.

On Friday morning, IDF Chief of Staff Lt.-Gen. Benny Gantz issued draft orders to 16,000 out the 30,000 reservists the cabinet approved Thursday. Most of the reservists called up thus far serve in the IDF’s Engineering Corps.

Foreign Minister Avigdor Liberman, however, told Channel 10 that toppling Hamas is not on the agenda as a goal for Operation Pillar of Defense.

“We are definitely considering a ground operation, but toppling Hamas, I think that’s something that the next government will have to decide,” he said.

Liberman also told Channel 2 that the IDF will only stop its attacks against Hamas and other terrorist organizations in the Gaza Strip once Israel accomplishes its goals of stopping rocket fire and increasing deterrence.

“Each time that Hamas fires [into Israel], there will be a harsher and harsher response,” he added.

Debate over an incursion into Gaza comes after three days of constant rocket-fire from the Strip, which has reached as far as Tel Aviv and Jerusalem for the first time, and targeted Israeli strikes against terrorist leaders and weapons depots in Gaza.

Earlier, the IDF sent text messages to 12,000 Gazan civilians, warning them to stay away from Hamas members.

The IDF also revealed on Friday that it had taken out Hamas’s nascent drone program.

The military recently focused its intelligence efforts on a group of Hamas terrorists who were developing and producing drones designed to strike fortified targets in Israel.

The terrorists were under the instruction of Iranian technical instructors, and the ‘production team’ carried test flights in Gaza of the drones.

The IAF struck the test flight sites in recent attacks.