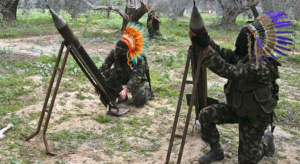 Sheikh Salem Salameh, a Hamas-affiliated legislator and the deputy head of the Palestine Islamic Scholars Association created his alternative version of US history last week while appearing on Arab television, saying that the wars between the Americans and the indigenous population at the early years of the United States were a result of the latter being Muslim.

Well this is a new one…Palestinian #Hamas MP Sheikh Salem Salameh: “George Washington Killed Indians Because They Were Muslims” 🧐

“Normalization of Relations with #Israel Is Betrayal of Islam” pic.twitter.com/1qO8JX6gyu

“George Washington killed Indians because they were Muslims,” he said, according to a clip of the interview shared by the Middle East Media Research Institute (MEMRI).

He also ranted that “no Muslim on the face of this Earth could ever imagine that there are Muslims who recognize the Zionist entity or normalize relations with it.  This is considered a betrayal of God, His religion, and the Muslims.”