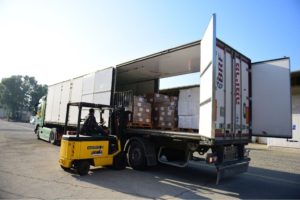 Despite the dire situation of the Gaza health system with all the hospitals full and their lack of medical supplies, Hamas officials on Tuesday have refused to receive the humanitarian aid Israel donated.

A truck of humanitarian aid delivered to Gaza on Tuesday, May 15 2018 – IDF Spokesperson’s Unit

“The supplies already entered Gaza. Despite the dire situation of the health system and the lack of medical supplies, Hamas has refused to receive the humanitarian aid and has instructed the local authorities to return them to Israel.”

On Tuesday, six trucks with humanitarian aid packages were sent through the Kerem Shalom Crossing. Four of the trucks belonged to the Palestinian Authority and the other two belonged to UNICEF. In addition, two trucks with medical supplies, were transferred by the IDF to Gaza.

The Humanitarian aid was sent to Gaza after Monday’s violent clashes in the Gaza Strip where more than 60 Palestinians were killed and 2,400 wounded in clashes with the Israeli army.

“The humanitarian aid transferred this week to the Gaza Strip represents the different policies that exist between those who take part in terror activity and the innocent population in Gaza who needs the humanitarian aid,” a statement from the IDF read on Wednesday.

The killings of more than 60 Palestinians on Monday was criticised widely in the international community.

Prime Minister Benjamin Netanyahu defended the use of force, saying “every country has the obligation to defend its borders”.

The army claimed that those killed in the clashes had attempted to plant explosives along the border fence. The IDF also claimed, that on two separate incidents, the protesters had fired at the Israeli troops.

The protests on Monday took place on the 70th anniversary of Israel’s founding, the day after which is mourned by Palestinians as the Nakba, or “catastrophe,” commemorating the more than 700,000 Palestinians who fled or were expelled in the 1948 war surrounding Israel’s creation.