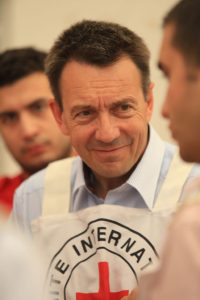 Hamas is believed to hold the bodies of Staff Sgt. Oron Shaul and Lt. Hadar Goldin, who were killed in the Gaza Strip in separate battles during Operation Protective Edge in the summer of 2014. Ethiopian Israeli Avera Mengistu and Bedouin Hisham al-Sayed, both suffering from mental health issues, crossed into Gaza voluntarily in 2014 and 2015 and are believed to have been captured by Hamas. A fifth Israeli, Jumaa Abu Ghanima, crossed the border into Gaza in 2016, and his fate remains unknown.

According to the Palestinian news agency Maan, ICRC President Peter Maurer asked Hamas leader in the Gaza Strip Yahya Sinwar to meet Mengistu and Sayed but Sinwar refused to allow it.

A senior Hamas official told Israel Hayom that “Israel knows very well what the price is for any information about the Israelis in Gaza,” adding Maurer “heard the movement’s firm position” on the issue.

Sinwar has said Hamas will not release any information about the missing Israelis until Israel frees 54 Palestinian security prisoners who were re-arrested after being released in a 2011 prisoner swap.

ICRC spokeswoman Alyona Synenko confirmed that the fate of people detained or missing on both sides of the Israeli-Palestinian conflict were among the many humanitarian issues discussed Tuesday.

“The objective of this visit is to discuss various humanitarian concerns,” she said, declining to elaborate on Maurer’s discussions with Sinwar.

Maurer later described his meeting with Sinwar as “good,” saying they discussed issues pertaining to the dire situation of the Palestinian population in Gaza.

Maurer also toured Gaza’s sewage-contaminated beachfront and met with beneficiaries of ICRC agricultural and medical programs. He was scheduled to meet with Palestinian Authority President Mahmoud Abbas in Ramallah on Wednesday, and hold talks in Israel with government officials and relatives of the missing Israelis.

Coordinator of Government Activities in the Territories Maj. Gen. Yoav Mordechai and GOC Southern Command Maj. Gen. Eyal Zamir had met with the missing and captives’ families on Monday, but an official in Mordechai’s office said that the fact the meeting happened a day before Maurer’s meeting with Sinwar was “a coincidence.”

“The officers meet with the families every few months as a matter of routine. The timing is coincidental,” he said.

Meanwhile, Goldin’s parents, Simcha and Leah, have traveled to the United States to “generate public pressure on decision-makers.”

“This is the path we have chosen for now,” Simcha told Israel Hayom. “We will meet U.S. Ambassador to the U.N. Nikki Haley and other U.N. officials, and we trust the Israeli Mission [to the U.N.] and Ambassador Danny Danon to make sure the meetings [take place] so that we can finally issue a statement that shows significant international support from the U.S. and U.N. to bring Hadar and Oron Shaul to their final resting place in Israel,” he said.