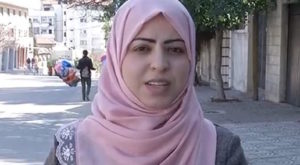 In June 2016, Hajer Harb reported that Hamas and the Palestinian Authority extorted Palestinians seeking medical care in Israel, Europe and elsewhere in the Arab world. Both Hamas and the PA, along with doctors who collaborated with them, demanded bribes from Palestinian patients seeking permits for better medical treatment. The report charged that those who didn’t pay the bribes were “left to die in understaffed and under-equipped Palestinian hospitals.”

The leader of the PA and Hamas were furious with the investigative report that exposed what some Palestinians referred to as the “mafia of destruction.”

After Harb’s report was published, Hamas official called her for an interrogation but she refused to reveal her sources without a court order.

The prosecution told me that I was facing the following charges: impersonation of another person (they claim I did not reveal my real identity during the investigative report); slandering the Ministry of Health, publishing inaccurate and incorrect information and working with ‘foreign parties’ (by preparing a report for a London-based television station under the pretext that the media organization is not registered with the Press Office in the Gaza Strip).

Ironcially, Abu Toameh reported that Harb herself required a permit to seek medical treatment for cancer in Jordan. However, human rights groups intervened on her behalf and she did not have to pay a bribe to get the permit.

While she was abroad, she was sentenced by a Hamas court to six months in prison and fined 1000 shekels ($250). If and when Harb returns to Gaza she will be arrested and jailed.

Critics have condemned Hamas for attempting to silence a journalist.

The Palestinian Center for Development and Media Freedoms (MADA) denounced the verdict against Harb, calling it a “very serious precedent against media freedoms.” MADA called the legal action against Harb a “setback to the growing repression of media freedoms” under both the PA and Hamas. “MADA, wishing a speedy recovery for our colleague [Harb], strongly condemns this decision, which lacks fair trial procedures.”

Jihad Harb (no relation), a Palestinian political analyst, characterized the verdict as an effort to both silence journalists and protect the corrupt practices of Hamas government in Gaza.

“The court ruling against the journalist did not come as a surprise,” Harb said. “However, it came as a shock because of the magnitude of the assault on freedom of expression and the media.” He noted that Hamas targeted the one exposing the corruption, not those involved in it.

Talal Al-Sharif, a Palestinian writer who was imprisoned for six months for criticizing Hamas, expressed his support for Harb, observing that he never received support from the PA even though he criticized Hamas, which Abu Toameh noted, also tolerates no criticism from journalists.

“The court verdict passed on Hajer Harb, and the ongoing punitive measures against Palestinian journalists in the West Bank and Gaza Strip, serve as yet another reminder that Hamas and the Palestinian Authority have no respect for freedom of expression and media freedoms,” Abu Toameh wrote. “Hamas and the PA may be at war with each other, but they both agree that the media is an enemy that needs to be defeated, to prevent the world from learning about corruption and repression.”

In August 2016, the nonprofit organization Human Rights Watch condemned the treatment of journalists by both Hamas and the PA, stating that their tactics led to a “chilling effect” on freedom of expression in the Palestinian territories. “Both Palestinian governments, operating independently, have apparently arrived at similar methods of harassment, intimidation and physical abuse of anyone who dares criticize them,” said Sari Bashi, HRW’s Israel/Palestine director.