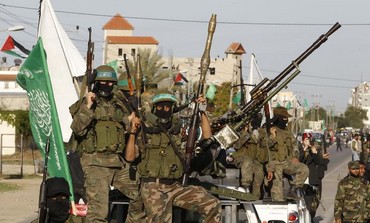 The paper quotes a Palestinian source as saying that Israel passed messages to Hamas through Egyptian mediators threatening to launch another large-scale operation in the Gaza Strip if the rocket fire doesn’t stop.Hamas’s Kassam Brigades have set up fixed and mobile roadblocks and have begun searching cars in areas near the border. They were also deployed to areas further away from the border that were used in the past to fire rockets at Israel, the Palestinian source told Asharq Al-Awsat.

A Salafist official told the paper that his group refuses to comply with the cease fire agreement and will continue firing rockets at Israel. The Hamas government arrested Salafi jihadists that claimed responsibility for rocket fire at Israel, the paper reported.

The relative quiet that followed the cease fire between Israel and Hamas after Operation Pillar of Defense in November was broken recently with sporadic rocket fire.

In recent weeks, rockets launched from the Gaza Strip landed in the Eshkol Region, and two Grad rockets fired by Gaza terrorists from the Sinai Peninsula exploded within the Eilat city boundaries. More recently, a rocket was fired at the Sdot Negev Regional Council on Saturday night.

The IAF struck what it said was a terrorist facility and an arms depot in the southern Gaza Strip overnight on Sunday in response to the rockets. On Tuesday, the IAF killed Hitham Mashal, who was associated with the global jihadi movement and whom security forces have linked to last month’s rocket attack on Eilat.

“I want to make clear that we will not tolerate a ‘drizzle’ policy. A ‘drizzle’ of rockets or missiles will be met by a very aggressive reaction, and we will take all necessary action to defend our citizens,” Prime Minister Binyamin Netanyahu warned this week.

Yaakov Lappin and Herb Keinon contributed to this report.