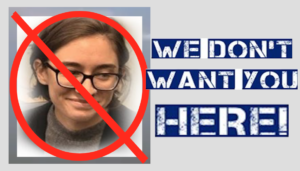 The Supreme Court ruled Thursday evening against the state’s position that Alqasem is prohibited from entering the country under Israel’s anti-BDS law, which bars non-citizen supporters of the Boycott, Divestment and Sanctions movement from visiting Israel.

Alqasem, 22, had served as the chapter president of the anti-Israel group Students for Justice in Palestine (SJP) during her undergraduate studies at the University of Florida. SJP is known for its staunch support of the BDS movement.

Following her graduation from the University of Florida, Alqasem applied for and received a student visa from Israel, enabling her to take part in a master’s degree program at the Hebrew University in Jerusalem.

The posters at Hebrew University, distributed by activists of the Zionist organization Im Tirtzu in English and Hebrew, included messages like “Lara, have you no shame?” and “Keep your BDS off my campus.”

The posters also called attention to Alqasem’s support of Rasmea Odeh, a convicted terrorist who played a key role in a 1969 bombing attack that murdered two Hebrew University students.

“You support a terrorist who murdered two Hebrew University students and now you want to study here? We don’t want you here!” read the posters.

The posters also suggest for Alqasem to study in Gaza, Syria or Iran: “Lara, if you despise Israel so much, you are welcome to go to Gaza, Syria or Iran. They will welcome BDS and terrorist supporters like yourself with open arms.”