By JUDY SIEGEL-ITZKOVICH
Diabetics must be regularly examined by their ophthalmologist to look for leakage of blood inside the retinas of their eyes, which could result in blindness. 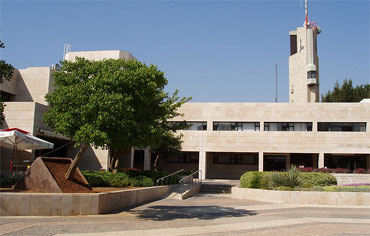 Now the Hebrew University of Jerusalem’s technology transfer arm, Yissum Research Development Company, has patented a method for detecting retinal microaneurysms that pose a high risk for leakage. The novel method will enable early diagnosis and treatment of the condition, potentially minimizing damage and saving vision.

Dr. Yaakov Nahmias and his team from HU’s Center for Bioengineering developed a computational method to identify microvascular regions with high risk of leakage based on fluid dynamics. The scientists found that high risk is correlated with increased level of a protein called Von Willebrand factor (vWF), which has been associated with early development of diabetic retinopathy. Retinal microaneurysms reduce vision because they eventually cause fluid leakage from blood vessels and retinal edema.

Localized leakage can be detected and treated using laser ablation, slowing the progression of diabetic blindness.

The technology could lead to targeted therapy or clinical detection using vWF. By enabling early detection of high-risk areas, treatment of diabetic retinopathy can shift from a reactive treatment to a preventive one, not only preventing blindness but also saving millions of dollars in medical costs.

Diabetic retinopathy is one of the leading causes of blindness in the Western world, affecting over 4 million people in the US alone, and treating the condition there costs $1 billion a year. With the growing prevalence of diabetes, these numbers are expected to double within the next few years.

Bedsores in elderly patients with weak immune systems can, if not properly treated, spread sepsis to other organs and lead to surgery and even death. Fortunately, a new technique called the VAC Therapy System has been shown to be successful in treating many cases since it was included in the basket of health services two years ago. However, it is still not widely known among patients and even some doctors.

Called negative pressure therapy, the technique was developed by the US company Kinetic Concepts, Inc., which was the first in the world to offer it. The company has a local branch, Chemitec, in Hod Hasharon but offers care to the bedridden around the country who are members of any of the four public health funds.

A box about the size of an A4 page of paper creates a vacuum to remove the liquid in the wound. A sponge and tube are attached to remove the liquid and heal the wound, says KCI chief medical officer Dr. Ron Silverman, who studied plastic surgery at Massachusetts General Hospital of Harvard Medical School and went on to practice plastic and reconstructive surgery (which includes wound care) full-time for 10 years at the University of Maryland Medical Center. He visited Israel recently and told The Jerusalem Postthere is also a liquid rinse that can promote healing even faster.

Silverman noted that the technology can be used for incision management after open heart surgery. If the sutures open, the device can hold the sides of the cut together, especially in obese people. The success rate of the treatment is about 85 percent, he said.

KCI is dedicated to helping others harness the power of the body to heal and regenerate. We provide therapies and technologies in the areas of advanced wound healing, regenerative medicine and pressure ulcer prevention that provide significant clinical and economic benefit. Our vision is to be recognized globally as a premier provider of innovative, high technology medical therapies and products that improve patients’ lives and deliver significant clinical and economic benefit.”

The long-awaited vaccine against varicella zoster virus (VZV) called Zostavax and made by the Sanofi Pasteur MSD company has finally been approved by the Health Ministry for use in adults aged 60 and above. VZV is one of eight herpes viruses known to infect humans and vertebrates. It commonly causes chickenpox in children, teens and young adults, but can hibernate for decades in the nerves, resulting in the painful condition of herpes zoster (shingles) in adults (and in rare cases, in children).

Nearly 30,000 Israelis are estimated to suffer from shingles each year. There is no specific treatment, only painkillers that do not eliminate the serious discomfort – patients just have to wait until it goes away. The condition is annually responsible for 16,000 health fund clinic visits and 3,000 hospitalization days.

The vaccine, which has been used for years in the US and elsewhere, is not included in the basket of health services.

The cost is NIS 400 per person and can be obtained as part of supplementary health insurance or at private pharmacies.

Men who suffer from Restless Legs Syndrome (RLS) may have a higher risk of dying earlier, according to research that appeared recently in the journal Neurology. The disorder is characterized by an irresistible urge to move the legs and often causes leg sensations of burning, creeping and tugging, which are usually worse at night. “RLS affects 5 to 10% of adults,” said study author Dr. Xiang Gao of the Harvard School of Public Health and Harvard Medical School.

“Our study highlights the importance of recognizing this common but underdiagnosed disease.”

For the study, 18,425 men with an average age of 67 who did not have diabetes, arthritis or kidney failure were evaluated for RLS. (Although RLS can occur in children, the study did not assess whether there was a long-term risk in this population.) A total of 690 of the men, or 3.7%, met the criteria for RLS at the beginning of the study. During the eight years of study follow-up, 2,765 of the participants died. Of the people with RLS, 171 or 25%, died during the study, compared to 2,594 or 15% of those who did not have it.

The study found that men with RLS had a nearly 40% increased risk of death compared to men without it. The association dropped only slightly after adjusting for factors such as body mass index, lifestyle, chronic conditions, lack of sleep and other sleep disorders. When the researchers excluded people with major chronic conditions such as cancer, heart disease and high blood pressure from the analysis, the association between RLS and an increased risk of death rose to 92% higher than those without RLS.

“We found that the increased risk was not associated with the usual known risk factors, such as older age, being overweight, lack of sleep, smoking, being physically inactive and having an unhealthy diet,” Gao said. “The increased mortality in RLS was more frequently associated with respiratory disease, endocrine disease, nutritional/metabolic disease and immunological disorders. Through research, we need to pinpoint why and how RLS leads to this possible higher risk of dying early.”