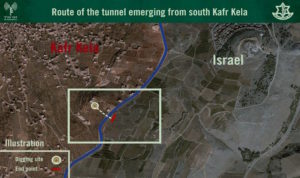 Explosive devices have been placed inside the tunnel by the IDF. Any entrance from the Lebanese side is dangerous. The IDF is currently investigating the attack tunnel.

The IDF stated that it holds the Lebanese Government accountable for the attack tunnels dug from Lebanese territory. “This is another blatant breach of UN Resolution 1701 and of Israeli sovereignty.”

IDF troops will continue to operate in accordance with the approved plan to locate and expose the Hezbollah terror organization’s attack tunnels.