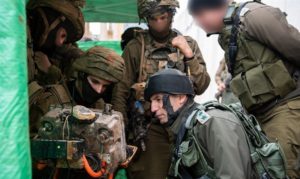 Imagine terrorists digging an attack tunnel like this towards your home. Hacking away inch by inch underground in order to kill you & your family. Israelis don’t need to imagine. It’s our job to protect them.

We just found a FOURTH Hezbollah tunnel dug from Lebanon into Israel. pic.twitter.com/PkHaTrrvDa

“Over the weekend, IDF troops exposed an addition cross-border attack tunnel that crossed the blue line from Lebanese territory into Israel,” the IDF statement read.

“The attack tunnel is under IDF control and does not pose an imminent threat,” it added.

The IDF said last week that Israel has, over the years, witnessed a concerted effort by Iran-backed Hezbollah to dig such tunnels, though emphasized that none were yet operational nor posed an imminent threat to Israeli civilians

“The digging of the cross-border attack tunnels that the IDF has discovered, before the attack tunnels became operational and posed an imminent threat to the safety of Israeli civilians, constitutes a flagrant and severe violation of Israeli sovereignty,” the army said in a statement.

“The Hezbollah terror organization, which is responsible for digging the crossborder attack tunnels, continues its activity that is supported and funded by Iran, to establish its terror infrastructure against Israeli civilians.”

The IDF said that “Operation Northern Shield” was initiated under a special task force that has since 2014 been leading operational, technological and intelligence efforts on the issue of tunnels on the northern border and has “developed vast abilities and knowledge on Hezbollah’s attack tunnel project.”

LISTEN: This is sound of terrorists digging underground attack tunnels from Lebanon into Israel. This is also the sound that helped us catch them before any Israeli civilians were killed, as Hezbollah intended. #CondemnTheTunnels pic.twitter.com/k4yYJ4Vdyu

The Lebanese terror group has yet to release an official response to the start of the Israeli operation.

A Lebanese military official told the Associated Press that troops and intelligence officials were “observing” activities along the border, where Israel was using earth movers and other heavy machinery to dismantle what it says are tunnels infiltrating its territory.

The Lebanese Army said the situation on the southern border with Israel is calm and stable and their forces are fully prepared to face any emergency.

“The situation on the Lebanese side is calm and stable, and is under close monitoring,” the army command said.

The Lebanese Army also said that forces had been deployed as usual to carry out operations with the United Nations Interim Force in Lebanon to prevent escalation.

Israel and Lebanon have been involved in a series of conflicts over the years and the two remain technically at war.

Since their last fought war in 2006, Hezbollah has strengthened its military capabilities significantly with an estimated arsenal of some 100,000 and 120,000 short-and medium-range missiles and rockets, as well as several hundred long-range missiles trained on the Jewish State.

Israel has also long warned that it believes Hezbollah intends to conduct cross-border raids in any future conflict with Israel, establishing a special forces unit — known as the Radwan Unit — with the specific goal of capturing an Israeli village near the border.