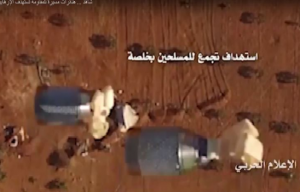 Unlike he other UAVs Hezbollah has sent into Israel, the Shiite terror group uploaded a video showing that it is now in possession of and extremely cheap but dangerous tactical drone, which the Pentagon is already taking steps to neutralize.

Despite the thousands of Hezbollah terrorists in Syria, one of the most worrying things to the West is the newest weapon the terrorist organization has added to its arsenal—a cheap UAV.

After Hezbollah launched over the last few years UAVs toward Israel, last week the organization publicized a video showing UVA attacks on the outskirts of Aleppo.

This UAV however, as written in the ‘Daily Beast,’ differs dramatically from its predecessors. Although it is capable of carrying much smaller loads of ammunition, it is significantly cheaper and lighter to operate.The clip shows chinese-produced cluster munition being shot from the drone onto the residents.

Already in 2004 Hassan Nasrallah, the leader of Hezbollah, promised that the Mirsad drone would be able to penetrate deep into Israeli territory while carrying 100kg of ammunition. Two years after this he carried through with his promise and launched three Ababil UAVs into Israel, all of which were intercepted by the Israel Air Force.

Mirsad drones and the Ababil drones are strategic weapons for terrorists and are intended to cross borders and instil fear into enemy cities. However, the UAV Hezbollah showed in Aleppo is a tactical weapon. Commercial UVAs are able to fly limited distances while carrying only several kilograms of ammunition. But not only are they cheap, they are also extremely accurate in launching explosions.

According to the Daily Beast, the Pentagon estimates that each UAV can cost as little as $200 and will be used by Hezbollah in other combat fields. Consequently, the Americans are working to upgrade their defense against drones.

This month, the American security apparatus asked scientists and companies to suggest technological solutions to “locating, recognizing, tracking and neutralizing UAVs on the move while simultaneously avoiding environmental damage.”

The Hezbollah-affiliated Lebanese newspaper ‘Al Akhbar’ published on Thursday morning an article entitled “Hezbollah on the ground and in the air.’

The propaganda article, which is meant to demonstrate Hezbollah’s new upgraded systems, features an interview with a senior commander who discussed the changes within the organization since the Second Lebanon War in 2006.

“After the victory in 2006, we were asked to change our offensive systems and to prepare for what the Israelis fear the most—our infiltration into the Galilee,” the official said.