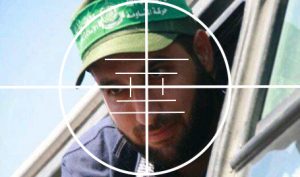 According to a Hamas report, Fukha, who was released in the prisoner exchange for captured Israeli soldier Gilad Shalit, was shot 4 times in the head by unknown attackers who disappeared.

Unknown assailants gunned down Hamas operative Mazan Fukha Friday night outside his home in Tel al-Hawa, in the Gaza Strip.

According to Hamas’ military wing, Fukha, who was released in a prisoner exchange deal for captured IDF soldier Gilad Shalit, was shot in the head  four times with a silenced weapon by unknown attackers who fled the scene.

Fukha, who was deported to Gaza as part of the Shalit deal, was responsible for planning terror attacks in the West Bank.

In a statement, Hamas’ military wing blamed Israel for Fukha’s death and described him as a commander in the organization.

Husam Badran, Hamas’ international spokesman, issued a statement on Twitter, saying, “The occupation is responsible for this assassination. Netanyahu knows this will not pass quietly.”

Ismail Haniyeh, Yahya Sinwar and Khalil al-Khayeh accompanied Fukha’s body at Shifa Hospital in the Gaza Strip and later during his funeral procession in Gaza on Saturday, attended by thousands of mourners.

Fukha, originally from Tubas, was sentenced to nine life sentences in 2003 by Israel for his role in the planning and execution of a suicide bombing on a bus near Safed, which killed nine people.

Fukha’s father, who still lives in Tubas in the northern West Bank, also accused Israel of the assassination, saying, “Israeli intelligence officers came to our house many times and gave us messages that Mazen would be liquidated if he continued with his actions.”

Fukha was released from prison in 2011 as part of the Gilad Shalit prisoner exchange deal and was deported to the Gaza Strip.

After his release, Fukha returned to terrorist activities and helped found Hamas’ West Bank headquarters and manage it from Gaza under the command of Saleh al-Arouri. In addition to Fukha, the operation also included Abd al-Rahman Ghanimat, another terrorist who had been released as part of the Shalit deal.

Together, the three men helped organize and conduct terror attacks against Israelis from the Gaza Strip.