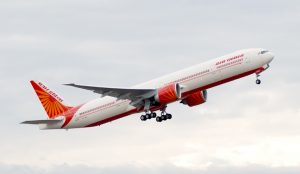 Netanyahu revealed the news in a briefing with Israeli reporters in Washington DC shortly after his meeting with US President Donald Trump.

“Air India signed an agreement today to fly to Israel over Saudi Arabia,” the prime minister said, adding that the flight would now take as long as the journey from Tel Aviv to London.

After a flurry of media reports sourced to the Indian carrier last month, Saudi Arabia’s civil aviation authority denied having made any agreement with Air India on overflight rights for its new Delhi-Tel Aviv service.

It will be the first time Saudi Arabia has agreed to allow scheduled commercial flights to Israel to use its airspace. Typically, even government aircraft belonging to allies were forced to make a stopover elsewhere.

Business aircraft flying direct between the two countries have been observed on public flight tracking websites to make a stopover en route to break up the journey, usually in Jordan.

Currently the only other airline to fly between the two countries is Israeli flag carrier El Al, which is forced to take an elongated route to avoid Saudi airspace. The new flight would be between two to three hours shorter.

In light of the reports last month, El Al is seeking international assistance to gain overflight rights of its own, Reuters reported last week.

In addition to Mumbai, the Israeli flag carrier would also benefit by being able shave several hours off its flights to Bangkok.