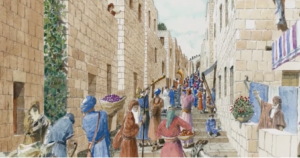 A 350-meter (382 yard) section of a path leading up to the Temple Mount has been opened for visitors after a ten-year excavation project. The newly unveiled passageway is called “Pilgrims’ Road” because it is now clear that this is the footpath that was used by Jews during biblical times to ascend the Temple Mount, bringing sacrifices to the Lord during the three Pilgrimage Feasts–Passover (Pesach) , Pentecost (Festival of Shavuot) and Tabernacles (Sukkot).

The passageway was originally discovered by archeologists in 2009, and in ancient times was 600 meters long (about 2,000 feet) in its entirety leading up from the eastern slopes of Mount Zion to the Temple beginning at the Pool of Shiloah in the City of David. The Pool of Shiloah, from which visitors can begin their walk along the ancient path, was first built during the reign of Hezekiah (715–687 BCE) to provide water to the city. Hezekiah built an underground tunnel bringing waters from the Gihon Spring to the Pool of Siloam.

Visitors can also walk through Hezekiah’s tunnel, though you will need a flashlight and take your shoes off as the waters still flow through the dark and narrow passageway. According to archeologists, the aqueduct/tunnel was built to protect Jerusalem from the impending siege by the Assyrians, led by Sennacherib.

My interview on Fox today with regard to the historic discovery and opening of the Pilgrimage Road in Jerusalem. https://t.co/38nbD1brsD

The Pool of Shiloah was also in use during the time of Jesus. In the Gospel of John we learn that Jesus sent “a man blind from birth” to the pool in order to complete his healing. As a freshwater reservoir, the pool would have been a major gathering place for ancient Jews making religious pilgrimages to the city. Influenced by Jesus commanding the blind man to wash in the pool, scholars suggest that it was also used as a mikvah (ritual bath).

According to archaeologist Ronny Reich, who led the original dig uncovering the ancient road, pilgrims used the Pool of Shiloah as a mikveh for ritual purification before walking up the Pilgrim’s Path to the Temple to bring their festival sacrifices. The pathway was originally eight meters wide (26 feet) allowing for the multitudes to make their way up to the worship celebrations.

In those days, there was a special celebration during the Feast of Tabernacles called Simchat Beit HaShoeivah (lit. “Rejoicing of the Water-Drawing House”). Worshippers would carry water taken from the Pool of Siloam up the Pilgrim’s Path into the Temple courts. There, a unique ceremony was performed every morning during the Feast called Nisuch ha-Mayim (lit. “Pouring of the water). It was a joyful celebration of God’s provisions, and after the long dry summer a time to ask the Lord’s blessing for the crucial first, or former, rains.

It was on the final and greatest day of these ceremonies during the Feast of Tabernacles that Jesus stood in the Temple courts and proclaimed in a loud voice, “Let anyone who is thirsty come to me and drink.” (John 7:37) Clearly, this would have been the same pathway that Jesus would have walked on his way up to the Temple.

The Pilgrim’s Path leading from the ancient City of David today passes the Palestinian neighborhood of Silwan. Palestinians have opposed the project saying that the digging in the Arab neighborhood has disturbed and displaced some residents. Of course, the Pilgrims’ Path, as well the entire region, have been part of Israel’s history for more than 3,000 years when King David drove out the Jebusites from Jerusalem and made it the capital of Israel.

As King David and all of Israel ascended to Jerusalem in those days with thanksgiving and blessings to the God of Israel, so let us rejoice that we too can now follow in the footsteps of our forefathers and go up to Zion, the City of the Great King. What a day we live in! What a time to visit Israel!