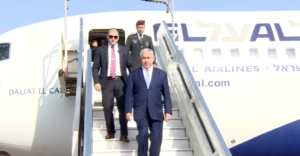 PM Netanyahu’s plane took a detoured route to Chad, flying south over the Red Sea and then across Eritrea, Ethiopia, Kenya, Uganda, the Democratic Republic of the Congo and the Central African Republic before entering Chadian airspace.

It is one thing for Khartoum to allow Israel to fly over South Sudan, and another thing altogether for it to grant permission for an Israeli plane to fly over its own airspace, a senior diplomatic official said.

Nevertheless, the official said that there was still diplomatic significance in the fact that the air control authorities in Sudan allowed the prime minister’s plane to cross South Sudan for the first time.

Israel and South Sudan enjoy friendly ties but Israeli planes have been denied access to its airspace because that airspace is controlled by Khartoum.

Khartoum’s step can be seen as a tiny gesture toward Israel.

In 2016, Sudan, in the Iranian camp and extremely anti-Israel, broke off with Iran and aligned itself more closely to Saudi Arabia. Last year, Saudi Arabia allowed Air India rights to fly over it airspace on routes to and from Tel Aviv to New Delhi.

Before leaving Chad, Netanyahu told journalists that the breakthroughs that Israel has made recently in strengthening ties with the Arab world is leading to inroads with the Muslim world as well.

On the seven-hour return flight from Chad, the plane flew east over the Central African Republic and South Sudan, and then north over Ethiopia, Eritrea , the Red Sea and into Israel.

On the way to Chad, the Prime Minister — who had not yet secured rights to fly over South Sudan — had to make a bigger southern loop and fly over Kenya, Uganda and the Democratic Republic of the Congo as well.