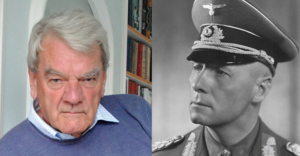 Books praising the Field Marshal, who was defeated at El Alamein by the British General Montgomery in the famous 1942 battle that put an end to Nazi plans to conquer the Middle East – and extend the Final Solution to its Jews – even include a tribute by US General Wesley Clark in the foreword to military historian Charles Messenger’s Rommel in Palgrave Macmillan’s Great Generals series.

In contrast, Robert Kellner’s grandfather Friedrich was a courageous non-Jewish anti-Nazi living in Laubich, German during the war, who penned a scathingly negative opinion of Rommel’s ability in real time, calling him out as a failure.

Friedrich Kellner’s diary, which includes his criticism of Rommel, was published in its original language in Germany in 2011, then edited and translated into English by his grandson and titled: My Opposition: The Diary of Friedrich Kellner–A German against the Third Reich, Cambridge U. Press.

Even worse than the inaccurate picture of Rommel’s military ability, however, writes Dr. Kellner, is that those who put Rommel on a pedestal gloss over the fact that he was Hitler’s close friend and therefore a de facto partner in the plans for extermination carried out by the Nazis. Putting the Field Marshal on a pedestal he does not deserve has the negative effect of encouraging emulation, wrote the academic – some of it in the form of the militant neo-Nazism we are witnessing today.

Holocaust denier, David Irving, reacted furiously to the op ed article on his blog. Irving himself wrote a book praising Rommel’s brilliant military prowess called The Trail of the Fox, the Search for the True Field Marshal Rommel and he placed a photo of his book’s cover to the left of his attack on Kellner.

“He needs an English lesson ” wrote the Jew hater on his website and linking to Professor Kellner’s:article We put a “Nazi” general on a pedestal and wonder why we have “neo-Nazis” – Israel National News, adding the insult: “a Jew teaching English in USA wipes his filthy hands on the Rommel legend.”

“I actually am glad that this chief of the anti-Semites, who perverts the truth about the Holocaust, is one of my readers. It’s a pleasure for me to see how my grandfather Friedrich Kellner’s descriptions of real Nazis can get neo-Nazis whining in indignation. That’s one of the main reasons Friedrich Kellner risked his life for six years (while under Gestapo surveillance) to write his diary.

“In an early entry, when Adolf Hitler already ruled all of Europe, my grandfather predicted their defeat, but he knew Nazi-types would always be with us, and he wrote, ‘These jackals must never be allowed to rise again. I want to be in that fight.’

“Well, he is in that fight, thanks to Cambridge University’s edition of his diary, and we must continue to shower these neo-Nazis with his scorn. If we cannot cleanse their minds of bigotry, we can at least keep them whining.”