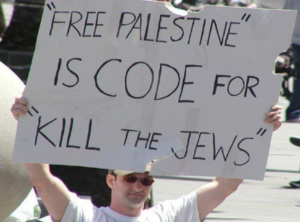 I name their reason as Anti-Semitism, because without hating Jews, you cannot fulfill your political or religious extremism which easily leads you towards terrorism. Every Islamic terrorist possesses a hatred of Jews ideology, they openly glorify anti-Semitism, and it doesn’t matter whether they are in religious places, in conferences, in the streets or in the field of terrorism (Jihad). You will certainly hear their famous slogan, Kill the Jews.

From my point of understanding, overwhelming Anti-Semitism is one of the prime and easiest tools of Islamic extremists and without possessing these filthy ideas, they cannot climb the next stage which is an act of violent extremism. Violent extremism can slowly turn into the act of terrorism and obviously, terrorist’s first wish would be to harm Jews whenever and wherever they find them. Often living in close proximity, what easy targets they can make for terrorists to carry out their terror activity against the Jews community.

Now, the question is this, is Anti-Semitism a basic tool of terrorism? Of course; it is.

There are three stages for someone to become a potential religious terrorist.

It depends on the person as to which type of hate he or she possesses inside and against whom, but I certainly assure you, that it does not matter the form of hate or extremism, the end of the target generally is to kill Jews. There are many examples. Terrorists one of the planned goals is to kill Jews, even though their larger mission is to target infidel governments and non-Muslims alike. The ultimate wish is to target and kill as many Jews as possible Here I share some famous examples where Islamic terrorists deliberately targeted Jews which was not their direct mission but the part of their terror mission.

Nariman House, the house that the terrorists attacked, killing a Jewish family and other Jews – Photo: Nicholas (Nichalp)Wikimedia

The world’s infamous Pakistani based terrorist organisation LeT (Lashkar E Taiba) carried out a ruthless terrorist act against the Indian people in 2008 that every person is aware of. The direct mission was to kill as many Indians as they wanted because of traditional hatred felt by many Pakistani Muslims for the Hindu community in India. None-the-less, they purposely targeted Norman House, a famous Jewish religious and cultural place in India.  Surprisingly, rather than just immediately killing their victims, the terrorists brutally tortured the Jews (among of them two were Israelis) before executing them. Islamic Terrorists were more than happy to kill Jews than Indians in their mission, as it was revealed in a joint investigation by Israeli and Indian security services. If you study the Mumbai attack case, you would find their main target was theoretically was Indian people but they added another important mission in their bloody game and that was to kill Jews.

In 2012, a lone wolf Islamic terrorist, entered into the Jewish school in Toulouse, in southern France and killed four French Jews including three innocent children. This was a direct act of terrorism against the Jewish community. He just wanted to kill Jews because he thought it gave him an easy entry into Paradise by killing Jews.

In 2015, the world was shocked when they turned on their TV sets and saw the horrifying news about the terrorist attack in the heart of a Paris suburb. An Islamic terrorist killed many innocent French citizens. The incident dramatically changed when they saw a terrorist enter into the Jewish supermarket, take hostages, many Jews and finally killed 4 of them, including Yoav Hattab, the son of the Chief Rabbi of Tunis Benjamin Hattab. This incident shocked the entire Jews community in the world, especially in the state of Israel. The main target of this attack was to make a statement to the French government and the French people, but again, this terrorist intentionally targeted the Jewish people in their ruthless attack. Committing this part of the terrorist act, he was generating more satisfaction for himself by targeting Jews. This was the all-encompassing hate he possessed inside his fanatical beliefs, only G-D knows for how long.

In 2016, a Muslim man with suspected terrorist ties stabbed three soldiers outside the Jewish community center in Nice, France. In the city of Nice, there are around 220,000 Muslims and 80,000 Jews living within diverse communities. But, unfortunately the Jewish community that has lived there for hundreds of years now sees approximately 25-35 physical anti-Semitic attacks annually, according to SPCJ (French Jewish Security Service).

The names of Omar and Asif are two names that Israeli community would never forget. These British-born Muslims detonated themselves in Mike’s Place in Tel Aviv a dance club in Israel and killed 3 and injured 55 innocent lives. The toll would have been higher but Omar Sharif’s belt failed to explode.  These two anti-Semitic boys intentionally committed a huge act of suicide terrorism in Israel. They travelled from Britain to Israel to harm Israeli civilians, civilians that had no way harmed them in Britain or elsewhere in the world. These British fanatics had crossed the border via Jordan, then spent some time in Gaza (Gaza was under Israeli administration at that time) where they prepared themselves to commit this act of terrorism against Israeli civilians. In fact, these terrorists were radicalised in the UK by their family members, the Muslim community and by the excess of Islamic freedom in the country. Both Islamic terrorists were hardcore religious persons affiliated with the ultra-conservative Deobandi sect of Islam, which is widely practiced in south Asian countries of Pakistan and Afghanistan and in communities in the UK. Omar Sharif’s wife, sister and brothers were changed in court as accessories for not disclosing his intention to commit suicide terrorism in Israel. Their family members were aware of his violent intentions against Israeli citizens and they chose to hide it until the mission had been accomplished.

These were obviously not only two British Muslims who were radicalised against the Jews/Israeli community but will I bet, 99% British Muslims hate Israel and celebrate every harm happens in Israel. These Muslims have been radicalised since they were still very young children.  A prime example, we just saw in a recent Palestinians Expo 2017. Very young school-aged Muslim children wore camouflage dresses or T-Shirts covered with slogans including “Free Palestine” and “Free Gaza”. The children were shouting along with their parents against the Jewish people outside the Expo event.

Among these children, could one or more be another potentially violent extremist who will hope to inflict grievous harm to the Jewish community in the future? Nobody knows.  But the way their parents teach them to have an intense hatred against the Jewish people from childhood on may lead any of them to become an Islamic terrorist whose one of the prime goals could have been ‘Kill the Jews’. This is why, I strongly believe that Anti-Semitism is a basic root that leads someone to commit an act of terrorism against the Jewish/Israeli community anywhere in the world. One way to avoid encouraging such type of violent attitude is, I believe, for the British government to ban events held in the streets of England in solidarity with Palestinians. These events cause an increase in the already too flourishing anti-Semitic atmosphere amongst British Muslims.

A fact that every individual should accept is, that Antisemitism is a form of Terrorism.

Reprinted with permission of the Author

Noor Dahri is a director of Pakistan Israel Alliance (PIA) and an independent researcher based in London, England.