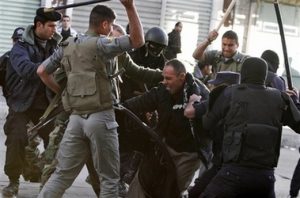 HRW director details his two years of documenting arbitrary arrests & torture which has been “systematic” under Palestinian rule for decades, while the West continues to finance it, ignoring the horrible transgressions by the Fatah & Hamas kleptocrats, to focus rather on the Jewish State.

More often than not, allegations of Israeli abuse take up all the headlines, leaving little room (or desire) to report on the verifiable abuses being perpetrated against the Palestinians by their own governments.

And, according to a scathing report produced by Human Rights Watch, those abuses are “systematic.”

The report labeled both the Palestinian Authority in the West Bank and the Hamas regime in Gaza as “police states,” and wondered why Western governments that purport to oppose such things continue to send so much of their taxpayers’ money to the Palestinians.

“Twenty five years after Oslo, Palestinian authorities have gained only limited power in the West Bank and Gaza, but yet, where they have autonomy, they have developed parallel police states,” wrote Human Rights Watch deputy director Tom Porteous, who urged the international community to halt all financial aid “until the authorities curb those practices and hold those responsible for abuse accountable.”

Among the abuses Human Rights Watch uncovered after interviewing 147 Palestinians were “systematic arbitrary arrests and torture” which “violate major human rights treaties to which Palestine recently acceded” and “may amount to a crime against humanity prosecutable at the International Criminal Court.”

Individual Palestinians cited in the report spoke of horrific mistreatment at the hands of their own police and security forces.

A journalist arrested in the West Bank for criticizing the Palestinian Authority of Mahmoud Abbas said that police officers tied his hands to the ceiling and “slowly pulled the rope to apply pressure to his arms, which caused him to feel so much pain that he had to ask an officer to pull his pants up after he used the toilet because he could not do it himself.”

A civil servant in Gaza who was arrested for daring to criticize Hamas on Facebook was subjected to “positional abuse… causing him to feel ‘severe pain in my kidneys and spine’ and as if his neck would ‘break’ and his ‘body is tearing up inside.”

The report spent a great deal of time addressing the use of “positional abuse,” whereby both PA and Hamas authorities force detainees into positions that cause excruciating pain, but leave little or no marks of physical harm.

One might wonder why the international community, which is in such an uproar over Saudi Arabia’s alleged gruesome handling of dissident journalist Jamal Khashoggi, has turned a blind eye to decades of similar abuse by the Palestinian Authority.

The answer, as some have suggested, is that the world doesn’t really care all that much about the Palestinian Arabs (as evidenced by the weak response to the slaughter of thousands of them in Syria’s civil war), and only heeds them any attention at all because their conflict is with the widely despised Jews.