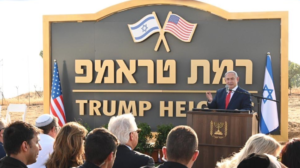 Golan Regional Council head, “Hundreds of people have reached out, many of them Jews from Canada and the US who are saying they want to make aliyah and live in ‘Trump City.’”

A special cabinet meeting was held in the Golan Heights Sunday to lay the cornerstone of Trump Heights, a new Israeli community named after US President Donald Trump.

The groundwork on Trump Heights began a few days ago, and the sign marking the entrance to the community was unveiled on Saturday.

US Ambassador to Israel David Friedman took part in the meeting.

A great day on the Golan. PM Netanyahu and I had the honor to dedicate “Trump Heights” — first time Israel has dedicated a village in honor of a sitting president since Harry Truman (1949). Happy Birthday Mr. President!! @POTUS pic.twitter.com/fdYWzokFLK

In a gesture of appreciation for Trump’s announcement, Prime Minister Benjamin Netanyahu announced that Israel would name a new Golan Heights community after Trump. As soon as Netanyahu made the plan public, the Golan Regional Council was flooded with requests for information about the new community. Over the past few weeks, the council has received more requests following the publication of the community’s exact location, which lies in the northern Golan Heights.

“Hundreds of people have reached out, many of them Jews from Canada and the US who are saying they want to make aliyah and live in ‘Trump City,’” says head of the Golan Regional Council Haim Rokach.

“There is an awakening of interest for all the communities in the Golan, not just the new one, but the unbelievable flood started with the announcement. We are referring some of the applicants to other communities,” Rokach said.

Last month, Israel Hayom reported that a group of potential new residents of Trump Heights was already making plans to move to the new community. The group includes 24 families and young couples ages 21-42. The “garin,” as such groups are known in Hebrew, has changed its named from “Garin Golan” to “Garin Haggai,” after Staff Sgt. Haggai Ben Ari, a Golan resident who was killed in Operation Protective Edge in 2014.

“It was important to us to receive permission from the family, as well as Haggai’s widow, first,” said Sagi Hadashi, 29, the founder of the garin who currently lives at Ramat Magshimim.

“She was moved, and wished us luck and gave us her blessing, and since then that’s been the name of our group,” Hadashi said.

The last few decades have rendered the UN as the ‘definitive maker of international law’. The are not. With regard to the only Jewish State, there’s almost nothing ‘just’ that comes from the UN or their resolutions… and this is obvious around the world.

Everything is political there, as they ignore all previously accepted judgments that were based of fairness, justice and universal understandings. Israel is singled out and judged on a completely different set of rules.

There are previously decided legal precedences that were accepted by western civilization, that made Trump’s declaration a mere echo of what should have been accepted worldwide, but since the UN ‘stole the microphone’, who would know?

Politics has driven the United Nations and its member-states into rejecting recognition of Israel’s sovereignty over the Golan Heights based on past UNGA and UNSC resolutions, those decisions are not set in International Law.

With the British changing the spirit and character of the Mandate by ‘giving’ 77% to the Hashemite bedouins to form the future Kingdom of Jordan, that action was ratified by the League of Nations, rendering the UK’s alterations as legal under international law.

When the United Nations was formed, it accepted all previous mandates, treaties and agreed articles from the League of Nations and stationed them into international law.

Unfortunately, when the Golan Heights was given to the French Mandate in 1919 in a bilateral deal, and even though that action went undisputed, it was never ratified by legally amending the 1922 Mandate, as illustrated below by Philip Shukry Khoury’s Syria and the French Mandate. The Politics of Arab Nationalism, 1920-1945. Princeton University Press, Princeton 1987.

The Golan Heights, being ‘given’ to the French, was an illegal transaction under Article 5 of the Mandate for Palestine …even though it went unchallenged, so its subsequent incorporation into Syria was also never legally binding in international law.

Article 5 of the mandate for Palestine explained by MythsAndFacts.org

For taking this just, but unpopular decision, Israel will remain eternally grateful to U.S. President Donald Trump. (When Israel says, ‘eternally’ it means exactly that, as in the story of Purim, or the story of Chanukah for example!)