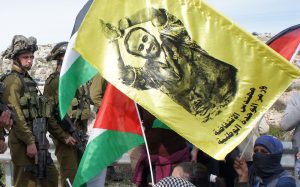 The former leader of Fatah’s armed wing, Tanzim and the founder of the Al-Aqsa Martyrs Brigade, a Fatah terror group, orchestrated the strike in what is being called the “Freedom and Dignity” strike, demanding better conditions in Israeli prisons.

A spokesperson for Israel’s Foreign Ministry said in a statement Monday that the prisoners were not political prisoners, but “convicted murderers and terrorists.”

“They were lawfully judged and receive conditions in accordance with international law,” said the spokesperson.

Barghouti, currently serving five life sentences in an Israeli prison for his role in deadly terror attacks during the second intifada (uprising), accused Israel of “inhumane” treatment of prisoners and “judicial apartheid” in a New York Times opinion piece published Sunday outlining the reasoning for the strike.

Barghouti has remained politically active behind bars, and is a popular figure among Palestinians who have tipped him among likely candidates to succeed 82-year-old Palestinian Authority President Mahmoud Abbas.

The former Tanzim leader, wrote in the op-ed that a hunger strike was “the most peaceful form of resistance available” against what he said is “Israel’s illegal system of mass arbitrary arrests and ill-treatment of Palestinian prisoners.”

In his piece, Barghouti, who was convicted in 2004 on five counts of murder, one count of attempted murder, and who was implicated in four other terror attacks, characterizes himself as “both a witness to and a victim of” alleged Israeli abuses against Palestinian prisoners, including “mass arbitrary arrests, torture, punitive measures and severe restrictions.”

The Times makes no mention of Barghouti’s history, referring to him at the bottom of the op-ed as “a Palestinian leader and parliamentarian.”

The publication has recently come under fire from Jewish groups and Israeli lawmakers for what is argued as a one-sided portrayal of Barghouti.

Earlier on Monday, 13 Palestinians were reported wounded in clashes as demonstrations swept the West Bank in solidarity with the prisoners.