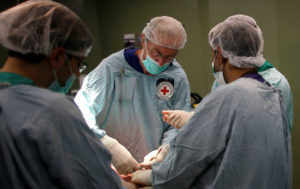 Since protests on the Gaza-Israel border began on March 30, Israeli troops have killed 115 Palestinians and wounded more than 13,000 people, including 3,600 by live ammunition, Robert Mardini, ICRC’s director for the Near and Middle East, said.

This week also saw the most intense flare-up of hostilities between Palestinian militants and Israel since the 2014 Gaza war.

“The recent demonstrations and violence that took place along the Gaza border since the end of March have triggered a health crisis of unprecedented magnitude in this part of the world,” Mardini told a news conference in Geneva.

The ICRC will set up a 50-bed surgical unit at al-Shifa hospital, Gaza’s largest.

“Our priority now clearly is to help gunshot wound victims. Imagine, 1,350 people with complex cases who will need three to five operations each, a total of 4,000 surgeries, half of which will be carried out by ICRC teams,” he said.

“I think such a caseload would overwhelm the hospital in Geneva.”

The six-month surge of medical expertise, drugs and equipment will speed the long road to recovery and relieve an overwhelmed health care system, he said.

“The last eight weeks definitely the first priority has been to save lives and save limbs. Post-operative needs today are massive in Gaza,” Dr. Gabriel Salazar Arbelaez, ICRC health coordinator in Israel, West Bank and the Gaza Strip, told reporters via Skype.

Guislain Defurne, head of the ICRC’s sub-delegation in Gaza, said many people will end up permanently disabled.

Mardini also said the economy of Gaza, which is blockaded by Israel and its other neighbor Egypt, was “suffocating,” with high unemployment, electricity limited to two hours a day, and untreated sewage flowing into the sea. “Gaza is a sinking ship,” he said.