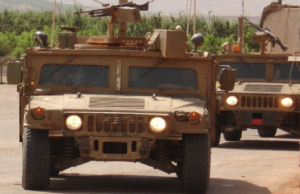 Although the Lebanese army claimed the 2 “Intelligence Directorate soldiers” were targeted with smoke grenades and suffered from smoke inhalation, the IDF said troops fired smoke grenades toward “suspicious individuals” [not in uniform] who approached the border fence near the Israeli communities of Netua and Dovev.

The Lebanese army accused Israel of injuring two soldiers who were on patrol along the border fence Tuesday morning.

According to the Lebanese army, the two soldiers were targeted with smoke grenades and suffered from smoke inhalation near the town of Rmaich across the border from the Israeli communities of Netua and Dovev.

“As a patrol from the Intelligence Directorate was inspecting a land lot… it came under an attack from a patrol belonging to the Israeli enemy,” the Lebanese news site Naharnet quoted an army statement as saying.

The army said IDF troops “hurled six smoke grenades, which resulted in suffocation injuries of two agents and a blaze that spread into the occupied territories. A Lebanese army patrol and members of the liaison unit of the UN. Interim Force in Lebanon (UNIFIL) and the Civil Defense immediately arrived on the scene and worked on dousing the blaze on the Lebanese side of the border.”

An IDF spokesman confirmed the incident to The Jerusalem Post and said troops fired the smoke grenades toward “suspicious individuals” who had been identified approaching the border fence with Lebanon in order to keep them away from Israeli territory.

Israel and Hezbollah fought a deadly 33-day war in 2006, which came to an end under UN Security Council Resolution 1701. That resolution called for disarmament of Hezbollah, withdrawal of the Israeli army from Lebanon and deployment of the Lebanese army and an enlarged UN force in the South.

Last week Maj.-Gen. Stefano Dal Col assumed command of the peacekeeping mission, taking over from Irish Armed Forces Maj.-Gen. Michael Beary. Dal Col will be tasked with keeping the quiet along the border with more than 10,000 UN troops deployed in southern Lebanon.

Since 2006, hostilities have been limited to occasional firing across the border and reported air strikes by Israel against Hezbollah leaders and military equipment in Syria, where the group is fighting in support of President Bashar Assad.

In 2015, two IDF soldiers were killed and seven wounded after Hezbollah fired anti-tank missiles toward an unarmored military vehicle in the Har Dov area near the Lebanese border. It is believed that five Kornet anti-tank missiles were fired by the Lebanese Shi’ite terrorist group in retaliation for an air strike in Syria that killed seven Hezbollah operatives a week earlier.

While the border with Lebanon has been relatively quiet since then, the IDF nonetheless sees it as the most explosive border region, with troops ready for the quiet to end at any instant.

In a televised speech given Tuesday night at an event in the Beirut suburb of al-Janubiyya to mark 12 years since the last war between the two enemies, Hezbollah Secretary-General Hassan Nasrallah said the group is in “a stronger position than ever since its founding” and that is stronger than the Israeli army.

“Twelve years Israel has threatened to go to war. At the same time, it talks about the strengthening of the resistance in Lebanon and its capabilities so much that one of the senior officers in Israel said Hezbollah is the second-most powerful army in the region after the IDF,” he said, referring to recent comments made by a senior IDF officer last week.

The border area with Lebanon has been flagged by the IDF as vulnerable to enemy infiltrations, and Israel’s military believes the next war with Hezbollah will see the terrorist group trying to bring the fight to the home front by infiltrating Israeli communities to inflict significant civilian and military casualties.