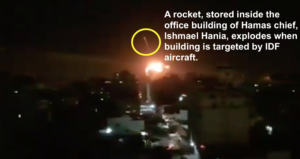 Israeli warplanes attacked the offices of Hamas chairman Ismail Haniyeh in the Rimal neighborhood of the northern Gaza Strip.

The building which was attacked serves as an office for many military meetings and was previously attacked during Operation Pillar of Defense in 2012.

“This is a central governmental asset used by the Hamas terrorist organization, which was attacked in parallel to the IDF’s ongoing attacks in the Gaza Strip,” it said.

Earlier, a five-story building was attacked in the Rimal neighborhood of the northern Gaza Strip. The building was used by Hamas for military purposes, such as the Ministry of Public Security.

The attacks were carried out in response to the rocket fire that hit a house in the town of Mishmeret this morning, injuring seven people.