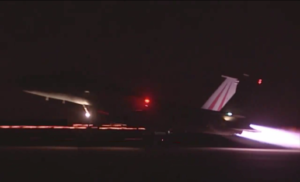 The IDF struck Hamas targets in the Gaza Strip Saturday, as IAF fighter jets targeted a “terrorist infrastructure” near the Gaza-Egypt border. Since December, the IDF has been targeting terrorist tunnels inside the Gaza strip with targeted attacks, often in response to rocket fire.

The IDF announced earlier this evening it would be closing the Kerem Shalom crossing after an assessment of the current security situation, but did not provide further details.

In December, both the Kerem Shalom and Erez crossings into Israel were closed “in light of security events.”

“The terrorist organization Hamas is responsible for everything happening in and out of the Gaza Strip,” the statement said.

More than 20 projectiles have been fired at southern Israel since US President Donald Trump recognized Jerusalem as Israel’s capital on December 6.

Several have been intercepted, including one over Ashkelon some 20 kilometers from Gaza, and a number have slammed into Israeli territory.

Retaliation by the IDF, usually in the form of artillery fire and/or air strikes, often targets Hamas outposts which tend to be evacuated by the terrorist group before the strikes.

Israel’s military has been investing extensive effort in locating cross-border tunnels from Gaza and has been building a ground-breaking underground barrier across the entire border with the Hamas-run enclave. In November, head of the Southern Command Maj.- Gen. Eyal Zamir stated that while the barrier is being built entirely in Israeli territory, “this wall can potentially lead to a dangerous escalation.”

In addition to the underground barrier, the IDF also has a new system to detect and destroy tunnels – a collaboration between advanced technology and various engineering, intelligence and ground forces units.

Since late October, Israel has discovered two cross-border attack tunnels, one belonging to Hamas and one belonging to Islamic Jihad, inside Israeli territory, and it is likely that the strikes on Thursday targeted one such tunnel belonging to one of the groups inside the Gaza Strip.

In addition, three Palestinians who crossed the border fence from Gaza were arrested Saturday evening.

The IDF announced last week that more rockets were fired at Israel in 2017 than in the prior two years.