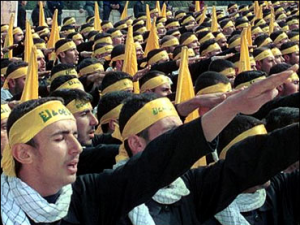 Speaking at the Knesset Foreign Affairs and Defense Committee, Eisenkot stated that IDF has used the time since the Second Lebanon War to dramatically improve its abilities and now has better intelligence and operational capabilities than ever before.

Hezbollah’s shows US made APCs in first-ever military parade on foreign soil, held in the Syrian city of Qusayr. – Hezbollah media

According to Eisenkot, in the 11 years since the Second Lebanon War ended, relative quiet has prevailed along the northern border and Israelis “should put things in perspective and not panic” regarding reports that Iran has helped Hezbollah to operate and manage underground weapons factories.

Still, the Chief of Staff said curbing Iranian influence in the Middle East is a major challenge, no less than defeating ISIS.Hezbollah’s rockets are not particularly accurate at the moment, he added.

According to Eisenkot, Hezbollah continues to violate UN resolution 1701 – which set the terms to end the 34-day Second Lebanon War fought between the two in the summer of 2006 – by continuing to operate from civilian areas in southern Lebanon.

While UNIFIL is helping maintain calm in southern Lebanon, its leadership does not do enough when Hezbollah violates the resolution, Eisenkot stated.

Analyzing the situation in Gaza, the chief of staff said Hamas is caught between governing and being a terrorist organization, and between wanting money from Iran and good ties with Egypt.

“Israel has an interest in positive dynamics in Gaza, but one cannot demand from the State of Israel to use its state budget for infrastructure that is harmed because of an internal Palestinian conflict, while Hamas invests money in terror,” he argued.

Electricity in Gaza has been reduced to less than three hours a day but Eisenkot stated that Hamas has agreed to take responsibility and pay for fuel imported from Egypt because “the electricity crisis is an internal Palestinian matter.”

As for the West Bank, Eisenkot said that terrorism continues and the IDF has had great success in stopping attacks through “high operational capabilities” of soldiers and commanders.

The situation in the West Bank did not escalate into an Intifada because of good policies that gave the general Palestinian population hope, which is in Israel’s security interests, he explained.

Eisenkot also called on MKs not to publicly criticize IDF officers, because they are acting on orders from the political level.

One example he gave of such orders is the “Kalkilya Plan,” to allow construction of more Palestinian homes.

“The IDF sees this as part of its ability to fulfill our responsibility to prevent a deterioration,” of the security situation, Eisenkot said.