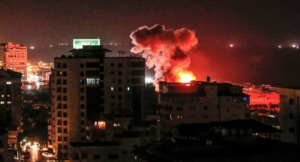 A 34-year old man was lightly injured by broken glass, and damages to several cars were reported.

The area where the rockets fell have been closed off by the police as bomb disposal units were called to the scene.

Earlier on Wednesday, air raid sirens warning of incoming rocket fire sent Israeli residents of communities along the tense Gaza border scrambling for shelter before the Israel Defense Forces (IDF) determined them to have been a false alarm.

The sirens were triggered shortly before 10 a.m. in the city of Sderot and communities in the Sha’ar Hanegev region of southern Israel.

The IDF later announced that they were false alarms, without specifying what had activated the sensitive detection system. Previous false alerts have been triggered by heavy gunfire near the border mistaken by the system for rocket fire.

In another separate incident on Wednesday, IDF said that “terrorists fired shots at civilians” engaged in the construction of the barrier along the security fence near the northern Gaza Strip and that an engineering vehicle was hit.

Raw footage: Hamas terrorists shooting at IDF troops from an outpost in the Gaza Strip pic.twitter.com/3ybzw8w3jW

In response, a tank targeted a Hamas position, since Israel holds the organization responsible for all violence coming from Gaza.

Meanwhile, an official from the Islamist Gaza Strip government told Turkey’s state-run Anadolu Agency on Wednesday that Hamas may be ready to reach an agreement toward a truce with Israel.

The Hamas official reportedly said the truce agreement will begin with a two-week cease-fire trial period beginning in late August in accordance with ongoing talks mediated by Egypt.

Qatar and Turkey are also involved in facilitating the talks alongside the United Nations and Egypt, the source said.

The agreement stipulates Gaza’s Rafah border crossing to Egypt will be permanently opened and the Kerem Shalom crossing, the blockaded enclave’s only intake point for commercial goods, will ease restrictions “dramatically”, according to the report.

Two rockets (left top & bottom) from the barrage of 8 rockets fired hit Sderot in Southern Israel on the evening of 8, Aug 2018. – Facebook

The push for a long-term ceasefire agreement follows months of clashes between Israel and Hamas, marked by a surge in cross-border arson attacks, rocket fire, and violent clashes which brought the sides to the brink of a full-scale war in two separate military flare-ups in July.

However, fighting between Israel and Hamas continue despite the ceasefire talks.

On Tuesday, the IDF admitted that earlier shootings from Hamas did not target Israeli soldiers which caused IDF to strike back, killing two Hamas militants, Israel’s Channel 10 reported.

Channel 10 cited IDF Maj. Gen. Herzi Halevi, the head of the army’s Southern Command, saying the shootings were not aimed at IDF’s Rotem battalion of the Givati infantry brigade but were part of a Hamas naval exercise.

Following the strike, Hamas’ Izzedine Al-Qassam Brigades announced that two of its members were killed in the strike, naming them as Ahmad Margan and Abdel Hafex Al-Silawi, both 23-years-old and from the Jabalia refugee camp.

Palestinian reports said the two were killed when IDF artillery struck a graduation ceremony of al-Qassam members at a Hamas base Askelan, northern Gaza, where senior Hamas figures were in attendance.