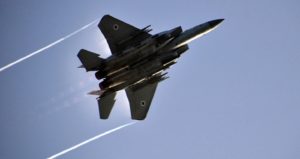 The attack was carried out in response to the attack on a home in a community in the Gaza envelope by a balloon bomb that exploded in the air.

“The IDF views any attempt to hurt Israeli civilians severely and will continue to operate against these attacks,” said the IDF Spokespersons’ Unit.

Earlier, an explosive device attached to a balloon exploded near the door of a residence in a community in the Eshkol Regional Council.

There were no injuries but extensive damage was caused to the building and the belongings inside it.