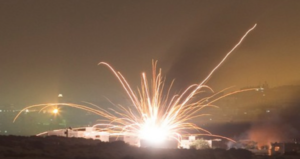 In addition, the Gaza fishing range has been reduced to 10 nautical miles Thursday morning, the Coordinator of Government Activities in the Territories (COGAT), Major General Kamil Abu Rukun, announced.

Hamas proudly has its combatants photographed as they prepare to launch rockets on Israeli civilian communities.

The IDF fire and the reduction of the fishing range came in response to a rocket fired from Gaza toward Israel overnight on Wednesday (Thursday morning). The rocket was intercepted by Israel’s Iron Dome. The IDF Spokespersons Unit stressed that Israel holds Hamas responsible for all actions in and from the Gaza Strip and that the terrorist group will suffer the consequences of any action against Israeli citizens.

“I think we know fairly well how to analyze who’s behind things and to act accordingly,” said Deputy Defense Minister Avi Dichter on Thursday, according to Kan news. “All the tools aren’t taken out in every [situation]. The agreement [between Hamas and Israel] is a tactical issue that connects our interests and Hamas’ interests, not in order to solve the root issue in Gaza.”

On Wednesday night, the IDF reported that the Israeli Air Force opened fire at an armed terrorist who approached the border in the southern Gaza Strip, near Khan Yunis

Two people were injured during the rocket fire, one is in a state of shock from the alarm and the other was lightly injured while running to shelter. They were treated at the Brazilai hospital.

MK Yair Lapid of Blue and White responded on his twitter account to the Wednesday night’s Gaza rocket fire, saying: “It’s an alarming failure on every level.”

“The lack of any sort of policy regarding Gaza, meager responses and empty words about a cease fire, an agreement, containment and occasional leniency again and again bring the citizens of the Gaza border communities to an unfathomable situation. There are no magic solutions, but there’s lots to do. For that one needs a good and functional government. Deterrence is brought back by force.” Lapid wrote.