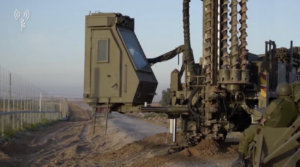 For the second time on Sunday, a terror-tunnel initially demolished during Operation Protective Edge, was re-destroyed by the IDF flooding it with materials making the tunnel Hamas has trying to recommission, unusable.
– Defense Minister Lieberman: ‘Hamas should invest the money in the welfare of the Gaza residents, because by the end of the year, its tunnel project will be eliminated.’

The IDF destroyed for the second time on Sunday a terror tunnel initially demolished during Operation Protective Edge, which Hamas has tried to put back into operations.

The tunnel, which runs from Rafah in the southern Gaza Strip to the Eshkol Regional Council inside Israel, was flooded with materials rendering the whole network unusable.

“We did not use explosives. It (the tunnel) was filled with a certain material, with a certain compound,” said the IDF’s English-language spokesperson Lt.-Col. Jonathan Conricus, who added troops did not enter Gaza to destroy the tunnel, which reached several meters from the Israeli border but did not cross it.

The tunnel, which was partially destroyed in the summer of 2014, appears to be the first case of Hamas trying to “recycle” part of its devastated network by digging a new tunnel to connect with what was left of the old one, Conricus said.

“Overnight, IDF forces operated against underground infrastructure in the Rafah area,” a statement by the IDF Spokesman’s Office said.

For several weeks now, we’ve been identifying Hamas activity, as they have been trying to rebuild underground infrastructure that was active during Protective Edge. We’ve been following this activity and decided to take this action to thwart it before Hamas could reconnect the tunnel to the old infrastructure and before the tunnel crossed into our territory. t did not pose a threat,” the IDF continued.

A spokesman for Hamas said the IDF was “marketing fake achievements” to boost the morale of soldiers and Israelis living near the enclave.

Another Hamas tunnel was bombed by the Israel Air Force overnight Saturday in the central Gaza Strip. The IAF also attacked other Hamas targets in retaliation for several IEDs that have been planted along the strip’s border.

Palestinian sources reported the targets included farmland east of the Zaytun Quarter in Gaza City and two Hamas military posts. There have been no reports of injuries or damage in Gaza.

“The IDF will continue acting to ensure the security of Israel’s citizens with all means at its disposal. The Hamas terror organization is responsible for everything that happens inside the Gaza Strip and coming out of it,” the IDF Spokesman’s Office said after the strike.

The Military Police closed off some areas of the Eshkol Regional Council as IDF forces were working to neutralize the tunnel. The Palestinians reported IDF engineering forces were operating on the southern Gaza border.

“There’s no developing security incident on the Gaza border and the roadblocks are just part of routine activity,” the IDF Spokesman’s Office said.

“The continued Israeli escalation against the Gaza Strip and the targeting of resistance targets are unprecedented steps meant to shuffle the cards, scare us and sabotage the big March of Return. It will never succeed,” Hamas said in response to the airstrikes. “It would only push our people to continue resisting and demanding their rights, first and foremost the right of return and the lifting of the siege over Gaza. If the enemy thinks this escalation would help it achieve its goals, it is dreaming and doesn’t know the character of this people. Israel is the one who bears the responsibility for the escalation and the harm to people’s lives.”

Over the past six months, the IDF has exposed and neutralized three border-crossing terror tunnels in Israeli territory—two in the Kissufim and Ein HaShloshaarea and another under the Kerem Shalom border crossing, which also branched out into Egypt. The tunnels were uncovered thanks to new technology to detect underground activity.

Also over the past six months, the IAF attacked two terror tunnels inside the Gaza Strip, one of them a month ago in the Zaytun Quarter in response to an explosive that went off on the border near Khan Yunis, leaving four IDF soldiers wounded.

“We’ve been operating in recent months using an ability that to our understanding will not allow re-using old tunnels dealt with during Protective Edge,” the IDF said. “Hamas is trying to use what it has to repurpose old tunnels by trying to reconnect what’s left of the tunnel tunnels. Hamas is once again investing its money in the underground project that is going down the drain thanks to our operations. We have a pretty good knowledge of the locations where it is possible to repurpose tunnels.”

Defense Minister Avigdor Lieberman recommended to Hamas “to invest the money in the welfare of the Gaza residents, because by the end of the year its tunnel project will be eliminated.”

“Systematically, based on quality intelligence and groundbreaking technology, Israel is destroying Hamas’s tunnels one by one. Those who think they can hurt us from below ground will come across an iron wall,” Lieberman added.

Prime Minister Benjamin Netanyahu stressed that “Our policy is to take determined action against any attempt to attack us and to systematically eliminate the infrastructure of terrorist tunnels and thus we will continue. The time has come for the international community to realize that the assistance funds to Gaza are being buried underground.”