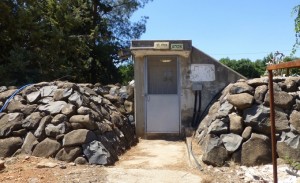 The IDF said that, after identifying “irregular activity” by Iranian forces in Syria, it instructed civic authorities on the Golan Heights to ready bomb shelters, deployed new defenses and mobilized some reservist forces.

IDF Chief of Staff Gadi Eisenkot cancelled a scheduled appearance at an annual security conference and was conferring with Defense Minister Avigdor Lieberman and other national security chiefs, officials said.

Trump’s hard tack against the nuclear deal, while welcomed by Israel, has stirred fears of a possible regional flare-up.

Iran and Lebanon’s Hezbollah have been helping Syrian President Bashar Assad beat back a seven-year-old rebellion. Israel has reportedly carried out repeated air strikes against them, hoping to stop the formation of a Lebanese-Syrian front to its north.

An April 9 strike killed seven Iranian military personnel at a Syrian airbase. Iran blamed Israel and said it would retaliate.

The order to prepare bomb shelters on the Golan was unprecedented during Syria’s civil war. Israel captured the Golan from Syria in the 1967 Six-Day War and annexed it in a move not recognized internationally.

“In recent years, we’ve been making preparations in coordination with the IDF and the Home Front Command so we could deal with escalation in the Golan area in the best possible way,” said the head of the Golan Regional Council Eli Malka. “We’ve been witnessing the very significant preparations the IDF has been doing all over the Golan, and we’re confident the IDF could provide a proper response and defend the residents of the Golan and the State of Israel.”

Residents of Israel’s north go to bed with Bomb-shelter unlocked for use during alert. – Photo: IsraelandStuff/PP

Despite the instructions to open and ready bomb shelters, the IDF Golan residents were asked to sleep or stay in shelters.

In addition to the Golan, mayors in other northern communities ordered the opening of bomb shelters.

In Safed, while receiving no specific instructions from the IDF on the matter, the mayor decided to open public shelters to help residents feel more secure.

“The public is being asked to ensure the shelters in residential buildings are accessible, clean and aired-out,” a message to Safed residents said.

The mayor of Karmiel got no special instructions from the military either, but nevertheless decided to open public shelters as well.

The Education Ministry said that while there will be no changes to the school schedule in the Golan Heights on Wednesday, 30 school trips that were supposed to take place in the area have been canceled in accordance with IDF instructions.

Israel has posted Iron Dome short-range air missile defenses on the Golan, suggesting that the anticipated attack could be by ground-to-ground rockets or mortars.

Earlier Tuesday, the US Embassy in Israel issued a security alert to American officials in the country, requiring them to obtain advance approval before visiting the Golan Heights due to recent tensions.

“Consider carefully travel to the Golan Heights until the situation stabilizes,” the security alert said. “Maintain situational awareness. Be aware of your