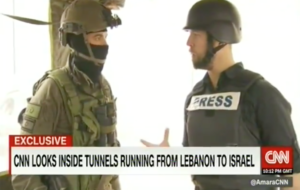 The CNN footage shows reporter Ian Lee dropping a camera several meters into the ground, passing limestone walls before exposing a sophisticated tunnel, complete with ventilation and lights. “It’s large enough for an NBA player to stand in,” the reporter said.

Watch as @CNN got exclusive access from the @IDF to one of the #Hezbollah attack tunnels.
1. An @NBA player could stand up in these tunnels.
2. It’s more complicated than finding a needle in a haystack. @IDFSpokesperson
מגיש לעולם את חזבאללה על מגש של כסף. ככה עושים תקשורת. pic.twitter.com/8z0tn8UqkQ

So far four tunnels have been exposed, but the IDF believes there are many more. The operation to discover and destroy the cross-border tunnels is expected to take months.

An IDF officer wearing combat gear and identified as Lt. Colonel R., explained to the reporter how complicated the tunnel finding operation is, saying a minor margin of error can lead to a failure to uncover a tunnel.

The same reporter toured an Islamic Jihad terror tunnel in Gaza in June by the terrorist organization. In contrast to the Hezbollah tunnel, Lee described the Islamic Jihad shaft as “hot and humid, narrow and low hanging.”

“It feels claustrophobic,” he said.

Allowing himself to be blindfolded, he was also taken to a rocket launching facility.

The Islamic Jihad leader showing Lee around said at the time: “The world needs to know that the resistance never plans to target children.” But sometimes their aim is off.