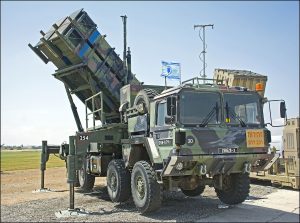 The IDF fired a Patriot missile from the same area two months ago, following the discovery of a UAV nearing Israel’s airspace. The aircraft, who had been launched from Damascus and operated by Lebanon-based terror group Hezbollah, was destroyed by the Patriot and fell within Syria.

Defense Minister Avigdor Lieberman referred to the interception by saying that “the State of Israel views with great severity any violation of sovereignty and will respond with force to any provocation.

“We view the Syrian regime as responsible for all firing and violation of sovereignty, We will not allow the establishment of the Shiite axis in Syria as a base for forward action,” he added.

In April, a Patriot missile battery in the north intercepted a UAV that had also entered Israel’s airspace from Syria. A similar incident occurred in the Golan Heights in July, 2016, when a UAV flew over Israel, prompting two Patriot missiles to be launched from the battery located in the Galilee region. It was unclear whether they managed to hit the aircraft.

In September, 2014, a Patriot missile intercepted a Syrian fighter jet that penetrated Israeli airspace over the Golan Heights. The downed Sukhoi 24 plane was the first time in 28 years that an aircraft entering Israeli territory was successfully intercepted.

A month earlier, a Patriot missile intercepted a drone in the south-western Syrian area of Quneitra near the border with Israel, after the aircraft, which belonged to the Syrian army, accidentally entered Israel’s airspace