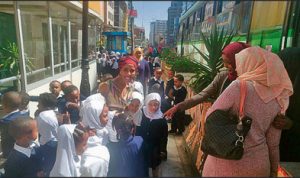 In an emotional letter, Maj. Yaros Shigot shares her unique experience as an IDF soldier who, for the first time, returned to her birthplace in Ethiopia where she read the Haggadah with the Jewish community on Passover night.

This is the story of a most exciting and unique Passover Seder for Ethiopian-born Maj. Yaros (Yerushalem) Shigot, who returned to Ethiopia this week for the first time since immigrating to Israel.The following moving letter, which was written to Yedioth Ahronoth by Shigot, who serves in the IDF’s Education Corps, contains the recordings of her journey, in which she shares her family history of their arduous journey to Israel, and explains why she shed tears while reading the Haggadah with the Jewish community in Addis Ababa.

Shigot also explains why the sight of her birthplace, combined with her love for Israel and family history, at once overwhelmed her with sadness but filled her heart with pride and longing.

“I decided! For the first time in my life I would take advantage of Passover and go toward freedom. I am on my way to my birth country—Ethiopia—to find an answer to difficulties that I often raised to my family. While in Israel they are having a Seder and telling the story about the departure from Egypt, I will be telling the story of the departure of Beta Israel (“House of Israel”—a group of descendants of Jewish nomads who travelled first to Egypt, then on to Ethiopia) and I will feel for myself in my legs the journey that my family underwent. Yes, I intend to spend the Seder night this year in Ethiopia with Jews who are waiting to make aliyah to Israel.

“I was born in Ethiopia, I made aliyah (immigrated) to Israel at age 4. My memories of the place are blurred. I am being photographed at a muddy house in some place in a village in the south of Gondar. My mother was carrying me on her back and getting the home ready for Passover with the women of the village. My memories of the village are isolated but those which are etched into my consciousness escort me at every moment, like the ambiguous memory of mine and of my father’s where we are sitting on the banks of a river near the village or the memory of the frightening night during which people from the adjacent village came to us to harm Jews.

“I know the tears will stream down my face the moment that I land because everything I will feel will be a sensation of missing out—a huge missing out—that my father, may his memory be blessed, never managed to do his own personal exit from Egypt and come with us to Israel.

“I learned more from my mother than everyone. Without any diploma or training whatsoever but with the wisdom of life which she acquired, she succeeded in teaching me every day a new lesson about empowerment and faith. She moved to Israel with six children all on her own and the difficulties of absorption which she carries with her every day.

“In one of our conversations I asked her: ‘Mom, isn’t it hard for you in this country?’

“She responded, ‘The yearning to come here was hard and agonizing, so everything is dwarfed.’

“My mother went through a life that was not easy and still she repeatedly says that for Israel she would do it all again. My grandma died a few months after my mother was born. Until she married at a very young age, my mother grew up with close family relatives. After she got married, she went to live with my father and together they brought ten children into the world. I was the youngest.

“My parents decided to pack up their small home in the village and head to the Land of Israel, but the physical and emotional difficulties, particularly of my father’s, stopped them and they returned to the village. My father got sick and my mother was compelled to look after him, the children and the house earnings together with my brother. Further up the road, my family and parents lost three children.

“But the dream of Jerusalem never faded. My brother, despite the slim chances, decided to make his way to Israel with other youths from the village and to ignore the rumors of the deaths of many who had embarked on the voyage and didn’t manage to survive the hunger and sickness.

“All this time we didn’t know what became of my brother and only when we got to Israel in 1991 did we have the privilege of meeting him. We realized that he was one of the few from the village who managed the journey. This emotional meeting was mixed with sadness because only then did my brother learn that our father had died earlier and did not manage to immigrate to Israel with us.

“After I heard these things from my mother—I realized what true closeness was even more. I tried, while in conversation with her, to imagine the yearning for the Land of Zion to such an extent that women and children get up and set out on a trek through the deserts of Sudan to get here. And I admit that I didn’t manage to imagine it. In my eyes everything sounds incomprehensible. Afterall, they preserved their Judaism so strictly on Ethiopian soil for hundreds of years, so why was it so important for them to come to Israel?

“Today, at the age of 30, now that I am a major in the Education Corps—which deals with values, educates IDF soldiers and emphasizes the common denominator among all the soldiers—I realize that in order to better understand this common denominator, I must return to where I was born.

“Twleve hours to Seder night, on the morning of the flight arrived, I received a blessing for safe travels from my mother and all the while my heart pounded hard. What does the journey hold for me? At 3:30pm we landed at the airport in Addis. At this point I began to digest things. The sights and memories flooded me all at once. It was as if I had kept silent all my life and in the first second that created a meeting between the thoughts that were buried deep and the reality before my eyes—everything rushed up and burst out.

“The pictures from the taxi window seemed as familiar to me as if I had never left. The mass of people in the streets, a group of men leading their flock, the children running and the faces of the women on the street. On one side of the road I see markets, poverty, simplicity and happiness, and on the other side luxury hotels and luxurious homes.

“I arrived at the hotel where I will be staying for the next few days. The Seder night will be held at the synagogue in Addis Ababa, which is located in the Magnia neighborhood. I quickly got ready and caught a taxi to the synagogue. The ride was a long one—this is the busiest time in Addis—and I keep asking the driver how long until we get there. I was like a little girl looking forward to something she had been promised. At the entrance to the synagogue—a temporary building composed of tin and an asbestos roof—the head of the committee stood up and slowly brought the members of the community to prayer and the Seder.

“He asked me with some suspicion where I was from, and at the same time apologized and made it clear that sometimes people came to seek to harm the life of the Jewish community. After I verified my identity, I was allowed to enter.

“Inside I saw that everyone was sitting with a bag containing the ‘Kita,’ which is actually the matzot baked by the community, and other traditional Passover dishes. In a moment I became the attraction of the evening—here came a guest from Jerusalem, from Israel! Rows of chairs on both sides of the synagogue, a side of men and a side of women, in front of a platform with a table and festive delicacies on which the cantor stands behind the Torah scroll.

“The cantor begins the seder, and on the rows sit weeping people, yearning and hoping. The embrace and thirst of the members of the community to feel my closeness at once stirred and ripped my heart. They have been waiting in this temporary structure for 16 years after they left their homes.

“I remembered that my mother told us that we also waited here for a year until we immigrated to Israel. Everyone bursts into prayer: ‘Next year in Jerusalem!’, they shout  as a huge crowd of men, women and children sing and dance. The power of faith and hope in spite of everything, astonished me and very much strengthened me—how much they want to immigrate to Israel and how they do not give up the dream despite what they are going through.

“The first morning in Ethiopia and the feeling of Seder continues. I realized that I knew almost nothing about the roots and culture that I had come from, and that I still had a lot to learn. ‘A nation that does not know its past—its future is shrouded in fog’ is proverb that takes on takes on a special significance for me.

“This is just the beginning of my journey in Ethiopia and I hope that what I am studying here will serve as a tool for me to continue my educational work in the army and in my life in general. But only when I was standing in front of my father’s gravestone, which was erected more than twenty years late and inscribed with his name and which had a Star of David engraved on it—only in that moment would I know that I had achieved the purpose of the trip.”