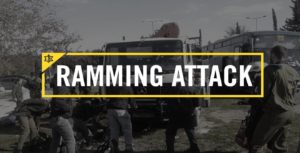 “IDF soldiers who stopped on the side of the road northwest of Ramallah were run over by terrorists. In response, the troops fired towards the terrorists, neutralizing two of them and lightly wounding another. Additional troops are on the way to the scene,” an IDF spokesperson said.

“Overnight, an IDF officer was severely injured and a Border Police soldier was lightly injured as a result of a car ramming attack in Kafr Ni’ma, northwest of Ramallah,” and IDF spokesperson said. “The injured soldiers were evacuated to a hospital for further medical treatment. Their families have been notified.”

Army medics and MDA volunteers treated the soldiers at the scene before evacuating them to the hospital.

“When we got to the scene, we were brought to an IDF medical unit which was treating two young men who had been hit by a car,” MDA paramedic Ahuva Stern said. “Both of them were fully conscious. We treated one young man in his twenties who was suffering from multi-system injuries. We provided him with life-saving medical treatment and evacuated him while continuing treatment, including anesthesia and putting him on assisted breathing. His condition is serious but stable.”

MDA paramedic Yishai Rauchberger and senior MDA medic Akiva Oshri added: “We joined an IDF medical force and treated a 19-year-old in the intensive care unit. He had suffered a leg injury and told us that he had been hit by a car. We gave him medical treatment and evacuated him to the hospital. He was calm and was able to communicate with us.”