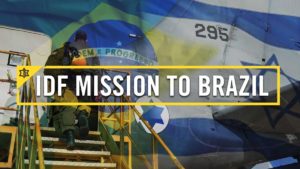 An Israeli army delegation departed for Brazil on Sunday morning to assist in search and rescue efforts following the collapse of a disused dam that killed at least 34 people and left hundreds missing.

Prime Minister Benjamin Netanyahu mobilized the IDF rescue mission on Saturday night after speaking with Brazilian President Jair Bolsonaro and offering to immediately dispatch aid to assist in the search for survivors of the dam collapse.

The delegation is headed by Col. (res) Golan Vach, the commander of Israel’s national search and rescue unit, and includes some 130 soldiers and officers from both active duty and reserve forces, among them, engineering experts, doctors, and search and rescue personnel, firefighters, and soldiers from the IDF’s underwater missions unit.

Representatives from Israel’s foreign ministry and Israel’s Ambassador to Brazil Yossi Shelly will also accompany the mission, the army said.

The IDF said in a statement that their primary duty will be to search for survivors of Saturday’s dam collapse, which sent a massive torrent of mud over the complex where 300 employees of the dam, owned by Brazilian mining giant Vale, were working.

The deluge rumbled on to the nearby town of Brumadinho — population 39,000 — southwest of the city of Belo Horizonte, cutting a swath through vegetation, farmland and roads, and impeding access to the area and hampering officials’ ability to determine the scope and gravity of the disaster.

Thirty-four people were confirmed dead and nearly 300 missing Saturday, with hopes fading of them being found alive. Among the more than 170 survivors rescued, 23 were hospitalized with injuries.

The IDF said that its search and rescue teams would use advanced equipment including cellular location, underwater radars and drones to assess the situation upon arrival.

The Israeli mission to Brazil is the first since the IDF’s national search and rescue unit was certified by the International Search and Rescue Advisory Group (INSARG) last November, joining a network of disaster-prone and disaster-responding countries and organizations dedicated to urban search and rescue and operational field coordination.

Israel, which is regarded as a world leader in disaster relief, has in the past offered aid to countries with which it has no relations as part of its diplomatic outreach.

“The IDF and the State of Israel will continue to assist in the aftermath of any disaster around the world that requires its experience and capabilities,” the army said in a statement.

Brazilian President Jair Bolsonaro reacted to the first big emergency in his country since taking office early this month by launching disaster coordination between the defense, mining and environment ministries and authorities in the affected state of Minas Gerais.

His government set up urgent coordination between the defense, environment and mining ministries to bolster operations by the state of Minas Gerais.

The military said it was deploying 1,000 troops, including sniffer dogs, to the affected zone under orders from the president.

Dozens of helicopters were used in the rescue operation Saturday because the released mud engulfed buildings, vehicles and roads with a deep, treacherous layer.

On Saturday, Brazilian mining giant Vale was hit with a $66.5-million fine over the dam collapse.

The amount, confirmed by multiple sources including a government official, was levied by the environment ministry, which did not immediately give an official figure.

Vale has been shaken by the disaster, the second in three years it has suffered in the same state.

The mining company, one of the world’s biggest, was involved in a 2015 mine collapse elsewhere in Minas Gerais that claimed 19 lives and is regarded as the country’s worst-ever environmental disaster.

“From now, the odds are minimal (to find more people alive) and it is most likely we will recover only bodies,” Zema told reporters late Friday.

In Rio, Schvartsman spoke of a “human tragedy.”

“We’re talking about probably a large number of victims — we don’t know how many but we know it will be a high number,” he said.