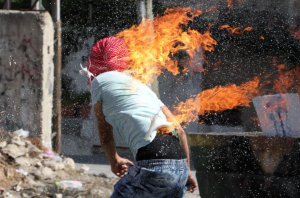 The medics identified the terrorist as Khaled Jawabrah from Al-Arub “refugee camp,” located north of the ancient city of Hevron, where Arab rioters were clashing with security forces.

A spokeswoman for the IDF said Jawabrah had “a lit Molotov cocktail in hand” and was attempting to hurl it at Israeli cars, in a potentially life threatening attack.

Forces on site shot him with a small-caliber live round, the spokeswoman said.

The firebomb attempt comes amid a rising wave of Arab terrorist attacks that has been raging since mid September.

From that time, no less than 22 Israelis have been murdered by the terrorists in near daily stabbing, shooting, and car attacks.