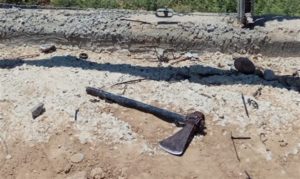 One of the two terrorists was killed in the incident.

IDF forces later found that the terrorist killed in the shooting was carrying an axe.

According to an Israeli army spokesperson, the IDF troops opened fire on “two terrorists who damaged the security fence and were armed with an axe.”

The second terrorist was also shot while attempting to breach the Israeli border fence, but managed to escape capture.

The failed attempt to infiltrate into Israel comes after more than two months of rioting on the Israel-Gaza frontier and attempts to breach the Israeli security fence.

Tens of thousands of rioters in Gaza clashed with Israeli security forces along the border, hurling firebombs and burning tires at IDF soldiers while attempting to cut through the barrier and infiltrate into Israel en masse.